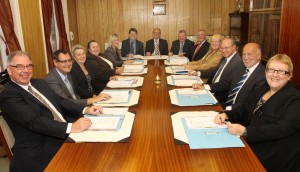 The Tamworth Co-operative Society’s Board of Directors are members of the Society who have been elected by fellow members. They each serve for three years and can then stand for re-election.

The Board of Directors is currently made up of the following people:

BOB READ had worked more than 40 years for the Society before retiring.

ALAN V KING had worked more than 25 years for the Society before retiring.

ALAN M KING is a former Financial Adviser and Dairy Manager. He first served on the Board from 1997 until 2015 and re-joined the Board in April 2016.

SHEREE PEAPLE is a former solicitor, Head of a university Law School and County Councillor. She is now an independent legal education consultant.

Steve Horsham started his employment as a trainee electrician in 1987 and has remained with the Society throughout his career, his current position being that of Society Facilities Manager.

Mrs A. A. Higginson

AUDREY HIGGINSON has been a member of the Tamworth Co-operative Society since 1985.

DAVID ROSE is a former employee whose association with the society stretches back for more than a quarter of a century.

SUZANNE PREECE is a supporter of local shops and businesses.

Management Executive Committee of the Society:

JULIAN COLES is the Tamworth Co-operative Society’s Chief Executive Officer and Secretary. He is only the eighth person to hold the title since the company was founded in 1886.

ANDY RICHARDSON joined the Society as Financial Controller in 2008 having gained 25 years’ experience in the retail sector.

JULIE GASPER, the Society’s Business Support Manager, has been employed by the Society for more than 30 years and joined the senior management team in February, 2014.

AMANDA WOODWARD is General Manager of the Society’s Funeral Services Division. She heads up a 35-strong team based at funeral parlours in Tamworth, Uttoxeter, Woodville, Heath Hayes, Pelsall and Great Wyrley.