A Tamworth town centre street was turned into a continental-style al fresco cafe this week to raise funds for Macmillan cancer support. Fresh coffee and and home-made cakes were served to grateful customers on the pavement outside Tamworth Co-op’s bereavement advice centre in Colehill, Tamworth. 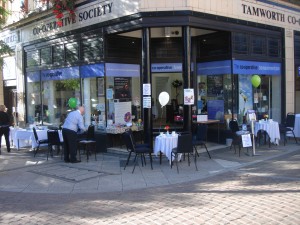 The scene outside Tamworth Co-op bereavement centre shortly before the first refreshments were served.

Each table was individually set with vintage crockery and staff served an assortment of delicious pastries from china cake stands. Background music created a beautiful ambiance and the sun shone throughout the day.

The event took was the first of its kind organised by the Tamworth Co-op’s Funeral Advice Bereavement Centre and raised more than £300.

Amanda Woodward, general manager of Tamworth Co-op’s funeral division, said staff were extremely keen to raise funds for a cause which does so much for cancer sufferers.

“Obviously in our area of business, we too often see the effects of cancer on people of all ages,” she said.

“Our staff worked very hard to prepare and serve coffee, home-made cakes and other delicacies.

One of the first customers to sample the culinary delights was Tamworth Co-op chief executive Julian Coles.

“It looked a very attractive scene outside our main buildings and I think customers enjoyed taking advantage of the continuing Indian summer,” he said.