A Burton pre school is to enjoy a playground makeover thanks to a donation from the Tamworth Co-op’s Community Dividend Fund. Shoppers at the Stanton Co-op convenience store donated the dividends they earned on their purchases to the Glebe Pre School a mile or so down the road. 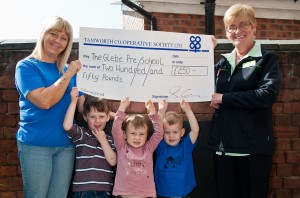 Cash from the Co-op… Jo Wyss, manager of The Glebe Pre-School accepts a cheque for £250 from Jackie Kolad, senior supervisor at the Stanton Co-op convenience store. Also pictured are three tots who will soon be playing in a much smarter play area.

Their efforts resulted in a cheque for £250 being raised for the pre school which has been in existence for 45 years.

Manager Jo Wyss says the income the group receives from fees and fundraising only covers the bare essentials.

“We are a charity and money from outside bodies is really important to us,” she said.

“We are going to use the cash from the Tamworth Co-op to improve our small outdoor play area. The fence is in a dilapidated state and the money will help us to replace it. We are hoping to re-vamp the play area in general and this will be the start of that. My own children attended The Glebe and we have children here whose parents came to pre school too. One of the mums nominated us for this money and we’d like to thank her, the Tamworth Co-op and everyone else who supported us at the store.”

Jackie Kolad, senior supervisor at the Tamworth Co-op convenience store in Stanton, handed over the cheque to the pre-school.

“This is a very worthwhile group which has been an important part of the local community for nearly half a century,” she said.

“They really deserve this money and it’s lovely that it will improve the outside area where they children play.”