The sky’s the limit for a group of Polesworth air cadets after they were handed a cheque for £1,305 from one of Tamworth’s best-known businesses.

1200 (Polesworth) Air Training Corps will use the money from the Tamworth Co-op’s Community Dividend Fund to buy a flight simulator to gain a realistic experience of flying aircraft. 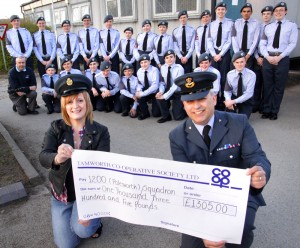 Shoppers at Polesworth’s Co-op convenience store helped to raise the money by donating their dividends to the ATC.
Each Co-op outlet supports a separate community organisation through the dividend scheme, with more than £30,000 having been given away during the last three years.

Flt Lt Gavin Walker says the group was ‘astonished’ to receive such a large amount.

“The Tamworth Co-op has come up with a fabulous scheme and it was humbling to receive that amount of money. Our grateful thanks go to everybody who helped with this.

“The flight simulator is a sophisticated piece of equipment and will really help our cadets to gain a realistic cockpit experience. In addition to improving aviation skills, it will also involve other new skills such as air traffic control.“