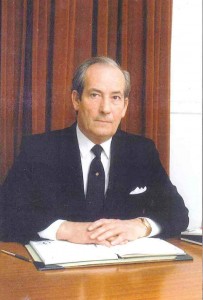 Tamworth Co-operative Society will be carrying out the funeral of a much loved and respected former senior manager on December 22.

John Leonard Scriven died recently at the age of 83 and will be remembered by thousands of Tamworth families for the compassionate and professional way he managed their loved ones’ funerals.

Originally from Beckenham in Kent, Mr Scriven arrived in Tamworth in 1967. He also had spells in the funeral departments of the Leicester and Oxford
Co-operative Societies.

Mr Scriven moved to the town with his wife Ruth and daughters Karen and Kim. Tamworth soon became his adopted home where he would remain the rest of his life.
He made his mark locally and was a founder member of the Tamworth Lions club which went on to raise thousands of pounds for charity.  When he retired he was also a member of Tamworth Probus.

Mr Scriven remained fit and active most of his life, excelling at swimming and judo. In later life he took up Tai Chi and bowls.

His wife Ruth died in 2007, a few years after the couple had celebrated their golden wedding anniversary.

His eldest daughter Karen Wakelin said the family will always be proud of the way he worked his way up the ladder despite missing out on a lot of education at an early age.

“During the war my dad’s parents refused to evacuate him from London and he never received the schooling most people got at that time. To then reach the position of general manager of Tamworth Co-op’s funeral division is a measure of the man.

“He was a very private and dignified person who demanded high professional standards. At home he lived for his family and was a doting father who gave my sister and I lots of love, support and excellent advice. He had five grandchildren, three boys and two girls, and absolutely idolised them all.”

Amanda Woodward, the current general manager of the Tamworth Co-operative Society’s funeral division, said Mr Scriven had been a major influence on her own career.

“He was incredibly professional, set very high standards and was a wonderful person.”

“I’ll never forget what he did for me as he taught me so much. He was very compassionate and helped to ease the pain of so many grieving people. He was exceptionally good at what he did. He took me on as his deputy which was a life-changing moment for me.

“He’s also left a special legacy in Tamworth. The catering suite at our main headquarters in Gungate was his idea and it was he who saw it to fruition. It is continuing to prove extremely popular with families from all over the Tamworth area.”

Julian Coles, chief executive of the Tamworth Co-op, described Mr Scriven as a ‘stalwart of the Society.’

“We were so sad to hear of his death and Amanda and her team will do their utmost to ensure he gets the kind of send-off that would match his own high expectations. I would like to express my sympathy to all members of his family.”

Mr Scriven’s funeral will be held at St Chad’s Church, Hopwas at 12.30pm.