If you know of any organisation which makes a real difference to where you live, this is your chance to help it get vital support. 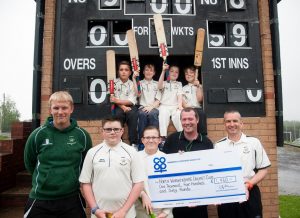 A local cricket club was bowled over to receive £1,460 from the Community Dividend Fund in 2016, thanks to the generosity of shoppers at the Tamworth Co-op convenience store in Polesworth.

Nominations are now open for the 2017 Community Dividend Fund which distributes thousands of pounds to good causes in the Tamworth Co-operative Society trading area.

Shoppers at Tamworth Co-op stores are being invited to suggest which groups should receive a share of the cash.

The scheme is funded by customers donating the dividends earned on their purchases, with each store adopting a particular cause in its neighbourhood.

Tamworth Co-op chief executive Julian Coles said: “The Community Dividend Fund is now in its eighth year and plays a crucial role in providing much needed financial support to local groups. Without the generosity of our customers, some of these grassroots organisations, which do so much to keep communities together, would struggle to survive.

“This is why it’s so important that we receive nominations from people in the areas we serve. They’ve got their ear on the ground and we want to hear from them.”

Members and non-members can nominate an organisation. It must be near the store you visit and should not be in the private sector or for profit. The board will take into consideration how many nominations a group receives. However, preference may be given to organisations which have not previously been awarded a grant from the Community Dividend Fund.

Forms are available from our Tamworth department store and supermarket, as well as our convenience stores in Bolehall, Dordon, Dosthill, Glascote, Kingsbury, Lichfield, Polesworth, Rosliston, Stretton, Whittington and Wood End. The closing date for nominations is November 28.