MP Heather Wheeler is to open a coffee morning at the Woodville Co-op funeral home in support of cancer sufferers. 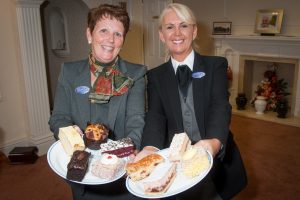 Woodville Co-op bereavement and community co-ordinator Angela Bowyer (left) and funeral director Lorraine Walker who will be joining in the World’s Biggest Coffee Morning. Visitors will be able to treat themselves to a cuppa and a cake in support of a good cause, with the chance to win hampers and other prizes.

The South Derbyshire MP will join staff taking part in the World’s Biggest Coffee Morning to raise money for the Macmillan charity.

The event at the Woodville Co-op in Granville Street on September 30, from 10am to 2pm, promises to be action-packed, with lots of raffle prizes to be won and stalls for visitors to browse.

One of the raffle items will be a painting by Stan Richards, a well-known local artist who died recently. The picture has been donated by his widow Pat to boost the fundraising.

Local businesses are also rallying to the cause. The Buckley Bakehouse in Swadlincote is providing cakes and traditional breads for people to sample, and a number of other traders in the town have contributed to the raffle.

Donations include a sweet hamper from Churchills Traditional Sweet Shop, earrings from Baumgartner jewellers, perfumes from Boots and Dean & Smedley, a spiral hose set from Masseys and a £12 voucher from K C Fish Bar, along with wine from Granville Stores and another raffle prize from Sublime Beauty Salons, both in Woodville. There will also be the chance to win a £100 hamper from the Tamworth Co-op.

Woodville Co-op bereavement and community co-ordinator Angela Bowyer said: “We’ve got other attractions lined up on the day as well. There will be a competition to guess how many dots there are on an eight-inch sponge cake, with the person who guesses correctly, or gets closest to it, winning the cake, and we’ll have stalls as well. Sue Taylor will be selling Avon products and Katherine Bentley Phoenix Cards. So there’s something for everyone to enjoy over a cup of coffee, or tea.

“We’re very much part of the local community here and so we want to do as much as we can to fundraise for worthy causes, like Macmillan, which help the families we look after.”

They will join thousands of groups up and down the country raising money for Macmillan which provides medical, emotional, practical and financial support to 2.5 million people in the UK living with cancer, along with their families and friends. The charity also campaigns for better cancer care.