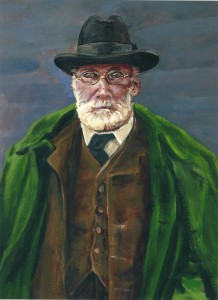 William MacGregor was the rock on which the Tamworth Co-operative Society was built.

The chair he occupied is still in the office of the Chief Executive with his initials clearly engraved on it. There are other physical reminders of his presence in the borough too, including Bolehall Manor, which was once his home. His grave at Hopwas Church is a surprisingly modest one for a man of his standing, an outward sign of his character.

However, the biggest remaining symbols of William MacGregor are the stature of Tamworth today and of course the continuing success of the Tamworth Co-operative Society, a business he breathed life into – at great personal expense.

Before his involvement in the Society, MacGregor had hardly been a controversial figure in Tamworth. In fact he had been probably regarded as something of a saint.

He first arrived in the area when he became the curate in Hopwas, where he remained for four years. His next stop was Liverpool, before finally being appointed as the Vicar of Tamworth in 1878 when he was 30.

The wealthy and volatile Scot didn’t waste time in getting to grips with the town’s many problems. He played hell with landlords for the squalid state of tenants’ homes. He also campaigned vigorously for clean water and proper sewage systems in every home; fetched children out of workhouses and put them into family homes; took orphans from the slums to holiday in his own home and founded and personally financed Tamworth’s first hospital. If that was not enough, he created a free library, set up a working men’s club, and built churches in Glascote and Hopwas. He gave St Editha’s a major facelift and had its bells re-cast. He also allowed some of his land to become Bolehall Park where children could play in safety.

MacGregor was a major giver, without brakes, and he ploughed endless resources into making Tamworth a better place to live. No benefactor has done more for the town we know and love today. He even started the fund to buy Tamworth Castle ‘for the town’ and at one time acted as a mediator between the miners and colliery bosses when wages were drastically cut.

MacGregor is also credited with starting the ‘St George’s Club’ where young men from all backgrounds would meet to debate topics, receive educational lectures and take part in sport. He financed a large building complete with swimming pool for them to use in Church Street.

But when he turned his attentions to setting up the Tamworth Co-operative Society, he became a target for terrible abuse, most notably from the rich shopkeepers who told him to keep his nose in religion and out of business. His crime was to support an organisation whose purpose was to provide quality goods at fair prices for the benefit of the poor and working classes. This flew in the face of many shopkeepers, who at that time had no lid on their profiteering. 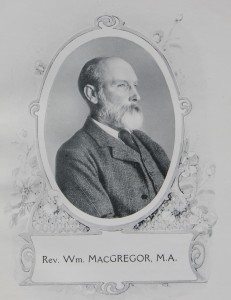 Rev MacGregor was abused in the street, and damned in letters sent to him personally and to the Tamworth Herald. Vicious letters were sent to the bishop, complaining about his support for the new organisation. Some parishioners even left the church in protest at his stance.

Within a year he had resigned as the Vicar of Tamworth. An editorial which he wrote in the parish magazine in December 1886 sums up his distress at the bad feeling surrounding him. In the article he describes the first eight years of his stay in Tamworth as giving him some anxiety but also ‘much happiness.’ He then explains why the ninth year has opened ‘under a cloud:’

‘My connection with the Co-operative movement, which is about to get a footing in Tamworth, is an offence to many who have hitherto worked cordially with me, and whom I have valued highly as friends and helpers.’

He then makes it clear that as much as he regrets the ill feeling that has arisen, he could not hold himself back from helping a movement ‘calculated to benefit morally, socially and politically a large number of people.’

MacGregor was without doubt Tamworth’s ultimate ‘champion of the poor’ and although his business connections put him at odds with the wealthy, his star remained high amongst the ordinary working men and women. He was an individual blessed with extraordinary strength, and completely faithful to his beliefs and morals. He was destined to benefit Tamworth in many more ways during his life outside the church.

William MacGregor died in 1937 at the age of 89. After suffering such intense personal abuse over his role with the Tamworth Co-op, he would surely have been very proud indeed to have seen the Society celebrate its 135th anniversary in 2011. His support in 1886 was decisive in getting it off the ground. It was MacGregor who provided the business with a base in Church Street and as its first treasurer was able to give the Society the benefit of his advice and experience to help it lay firm foundations. Crucially, he also acted as its guarantor.

In short, nobody in Tamworth’s history has made a bigger contribution to the Society – or indeed to Tamworth itself – than William MacGregor.