A cricket club hit for six by burglars had some better news after finding out it had been awarded £1,460 from the Tamworth Co-operative Society’s Community Dividend Fund. 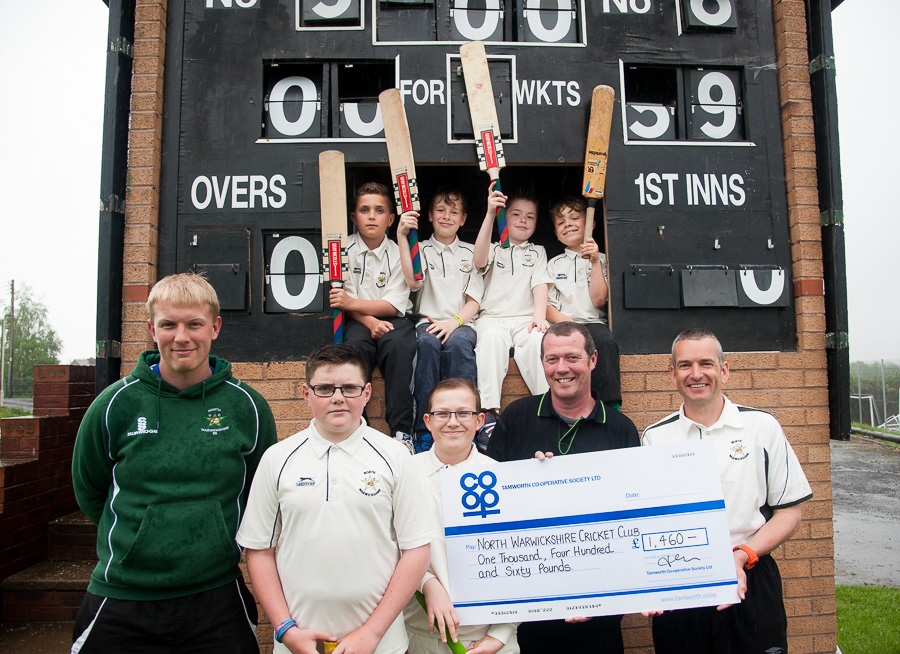 Karl Vyse, manager of the Tamworth Co-op Polesworth store, is pictured (second from right) handing over the cheque to North Warwickshire Cricket Club treasurer Steve Hern (right), with Rich Stonehouse (left), the club’s first team vice-captain and junior coach, and some of the junior team players who attended the presentation.

The money, raised by shoppers at the Tamworth Co-op’s Polesworth store donating their dividends, will go towards replacing one of three mowers stolen from North Warwickshire Cricket Club.

The rest of the cash will be spent on new helmets, bats, pads, gloves and kits for the juniors who regularly play cricket at the club’s ground in the village.

Treasurer Steve Hern said all the players and officials were bowled over by the announcement of the grant after the devastation of the break-in.

“It really was a great surprise after what happened, and we’d like to thank the Tamworth Co-op, as well as all the shoppers who nominated us and donated their dividends.”

The club, which has three junior teams for the under 9s, 11s and 12s, and three senior teams, has produced several top cricketers, including Peter McKay who went on to play for Warwickshire, while first team captain Edward Smith and his brother Jack have represented the county at under 16 level.

Karl Vyse, manager of the Polesworth convenience food store, said:  “I’m so pleased that we’ve been able to help the club through the Community Dividend Fund. The timing of the grant has turned out to be perfect, following the raid on the premises.

“It’s a fantastic scheme because it gives our customers the chance to give something back to the community they live in.”

Police have been examining CCTV footage from the burglary in the early hours of April 23 to try to track down those responsible. Two men were filmed loading a Ransome square mower, a wicket mower and a ride-on lawnmower onto a lorry after breaking into the ground at about 12.40am.

In the meantime, the club has been loaned a mower by another cricket club to tide it over as the new season gets under way.