Staff at a Tamworth Co-operative Society funeral home have launched their own special initiative to help the town’s homeless.

The group, who all work at the Society’s branch in Upper Gungate, are preparing ‘care bags’ packed with essential items for rough sleepers.

They became increasingly aware of the plight of homeless people in the town when Tamworth Co-op handed over £5,000 to support the Winter Night Shelter project which operates from St John the Baptist Church. The donation proved crucial in landing extra government funding to extend the scheme until the end of March. 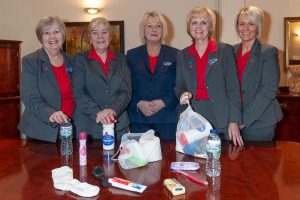 Funeral arranger Janice Chetwynd said she and her colleagues were inspired by their employers donating such a significant sum and wanted to do something themselves to help.

“We were concerned for the welfare of the homeless during the rest of the year, as well as those who do not take advantage of the winter shelter at all,” she explained.

“We got the ‘care bag’ idea from an appeal in Calais to provide basic, but essential items to the refugees over there and we’ve adapted it to support the homeless on our doorstep.”

“It’s so sad to see people in Tamworth sleeping in bus shelters and doorways in this day and age.”

The funeral staff have received the backing of their managers who have allocated a pot of money to the cause.

“We were impressed by their infectious enthusiasm to do something positive,” said Amanda Woodward, general manager of Tamworth Co-op’s funeral division.

“The funeral team has held meetings with community leaders who have first-hand knowledge of the homeless problem locally. Their advice and expertise have been invaluable.”

A meeting was also held with Sheree Peaple, chair of the board of governors of the Heart of Tamworth Community Project, and lead trustee Simon Peaple who is responsible for the day-to-day running of the night shelter. He also heads up the town’s Starfish Project which organises drop-in day centres for vulnerable people.

Around 40 bags are now being filled with items such as socks, hand gel, toothbrushes, toothpaste and chocolate bars. The bags will be handed to the Starfish and Street Angels groups for distribution to needy individuals.

“We learnt that socks in particular are invaluable to homeless people, so we will include at least two pairs in each bag,” said Cath.

An information leaflet will also be included in the kit. It will list emergency telephone numbers and provide dates and times of support centres operating throughout the year.

Sheree Peaple, who also serves on Tamworth Co-op’s board of directors, said that knowing they are not alone in times of crisis was of paramount importance to people who find themselves without a roof over their heads.

“Homelessness is a terrible situation for anyone to face,” she said. “One of the most important things we have learnt from the people we encounter is just how important it is to them to feel that someone cares. So the fact that Tamworth Co-op cares is really important.”

Tamworth Co-op chief executive Julian Coles said the new initiative fits in perfectly with the Society’s long standing ethos of making a positive difference to the communities it serves.

“Every year we support a wide variety of worthwhile community causes on our doorstep and this year we have also made a significant contribution to making life better for homeless people. It’s marvellous to see our funeral staff taking this a step further.”