One of Tamworth’s best-known and long-established junior football clubs has netted a much-needed donation from kind-hearted shoppers at Bolehall Co-op.

St John’s Junior Football Club will use the £500 grant to buy new training equipment for two of its teams who have been smashing in the goals in recent months.

Customers at the Tamworth Co-op owned convenience store raised the money after being asked to give up the value of their dividends in support of a good cause on their doorstep.

Manager Hayley Gilbert said they were invited to nominate which group they would like their ‘divis’ to go to as part of the co-operative society’s Community Dividend Fund scheme.

“I’m really pleased to see this money going to St John’s Junior Football Club to benefit their young players. The club is very much a part of the community. It provides recreation and fitness for hundreds of children in the area, so it certainly deserves our help. 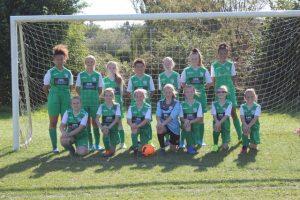 Members of the St John’s Junior Football Club girls’ team who will benefit from the Tamworth Co-op Community Dividend Fund.

“Tamworth Co-op gives out thousands of pounds every year to clubs, charities, schools and other worthy organisations locally from the money it would normally pay out in dividends.”

St John’s JFC secretary Jason Adams said everyone involved with the club wanted to say a huge thank you to members of the Society for their kind donation.

“We have to fundraise or find sponsorship to get most of our training equipment as a grassroots club. I believe the coming season is going to be very difficult for all clubs and teams as donations and sponsorship are going to be hard to come by, so the £500 from Tamworth Co-op’s Community Dividend Fund is very much appreciated.”

The new training gear will be used by the under 12’s Saints and under 13’s Spirit girls’ teams who have produced a video during the lockdown demonstrating their soccer skills. Players are filmed doing kick-ups and other tricks from the isolation of their gardens, with the clips then edited to make it appear as if they are passing the ball to one another.

The Spirit team was enjoying its most successful season ever, heading for a top three finish in their league, after winning a pre-season tournament, until the coronavirus pandemic brought matches to an abrupt halt. Bad weather also disrupted the start of the season, with some fixtures delayed for weeks. However, when the girls did take to the pitch, they notched up some convincing wins, including 10-0 in one game – putting into practice what they had been working on in training.

The Saints were also on a high after winning one of their matches 9-0. They were expected to clinch a league place in the top four, in only their second season. The team had games in hand when all football across the country was stopped in March.

Mr Adams added: “During the Covid-19 lockdown the girls have kept busy with tasks set for them to prepare for when they can eventually play again. We’ve also held an online zoom quiz for them.”

St John’s Junior Football Club has been running for nearly 40 years, fielding 20 teams of boys and girls, from under 7s to under 13’s in four different leagues. They are based at Landau Academy.