Members of a Heath Hayes bowling club joined forces with non-bowlers to take part in a charity competition held in memory of one of their most ardent supporters. 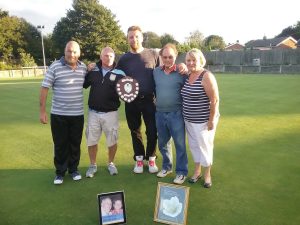 The Doubles Bowling contest, which took place at the Heath Hayes Constitutional Bowling Club, was dedicated to Muriel Colbourne, a familiar face around the green for many years.

Bowlers partnered with non-players to raise £375 for a local hospice providing medical and nursing care for people with cancer and other serious illnesses. The money was raised partly from the entry fees and a raffle. Afterwards teams were treated to a barbecue provided by the Halliwell funeral home in Heath Hayes.

Born in Walsall, Muriel moved to Heath Hayes when she got married to Herbert and lived in the village for more than 50 years. Sadly, she died of cancer in August 2002.

Bowling club member Sandra King, one of the funeral arrangers at Halliwell, said: “Muriel was a very active member of the club, serving on the committee for many years. She wasn’t a bowler herself, but she loved watching her family play bowls at the club and supporting all her family members and friends. 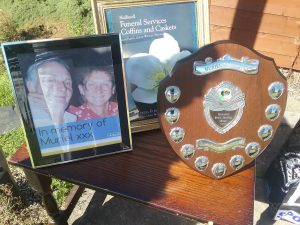 “She passed away in Stafford Hospital, but we felt St Giles Hospice in Whittington was the right place to raise the money for as it helps so many people with cancer in this area.

“Everyone paid an entry fee, part of which was donated to the hospice, and the rest was given in prize money. The winners received £20 each and the runners-up £10 each. We had a great day and the weather was kind to us, so the barbecue that Halliwell kindly laid on, was much appreciated,” added Sandra.

The annual event is open to bowlers and non-bowlers to encourage people to come along and enjoy a family fun day.