A Brownhills school has been celebrating another cash windfall from the Tamworth Co-op which will help it to improve its play facilities. 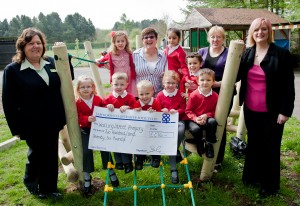 Sandra Milburn (pictured front, left), manager of the Tamworth Co-op convenience store in Brownhills, personally delivered a cheque to Watling Street Primary School to the delight of teachers and pupils. Head Teacher Lesley Powell is pictured in the centre of the back row.

The money will fund special add-ons to the climbing frame which the Society also helped Watling Street Primary School to buy last year.

Nearly £300 has been allocated to the school from the Tamworth Co-op’s Community Dividend Fund which is supporting 16 community organisations during 2014.

The money was raised by shoppers at the convenience store in Brownhills donating the dividends they have earned on their purchases.

“We can’t thank them enough,” she said.

“The money they have given us in the past also helped us to purchase white boards for the classrooms, and now they are helping us to further improve a climbing frame which they helped us to buy in the first place.

“I’d also like to thank all the shoppers and parents who donated their dividends to us.

It’s a good time to be at Watling Street Primary School as it is also set to have a new £400,000 state-of-the art building which will include two classrooms for reception and nursery children. The move was prompted by the discovery of a serious crack in the main beam of the old building.

The new extension will boast a modern kitchen, a toilet block and round feature windows. It will be finished in red brick in keeping with the character of the rest of the historic school which dates back to 1878.

The major improvements also include the creation of a new outdoor play area with a soft surface.

Sandra Milburn, manager of the Tamworth Co-op convenience store in Brownhills, handed over the cheque to Lesley Powell.

“It’s a pleasure to be able to give something to a school which is at the heart of the local community,” she said.

“There always seems to be a special atmosphere here and the children seem really happy. We hope this will enable them to have an even more rewarding experience.”