A village Brownie pack has taken delivery of a £671 cheque from the Tamworth Co-operative Society. Gaynor Satherley, Brown Owl at Whittington 1st Brownies, was stunned by the amount raised by the Society’s Community Dividend Fund.

She says the £671 cheque will significantly boost the group’s funds. Some of the money will be used to celebrate the centenary of the Brownie organisation.

The cash will help pay for the girls to attend a huge party at the County Showground in Stafford. In addition they will be able to contribute to the building of a massive model elephant which the Staffordshire Division is producing to mark the occasion. 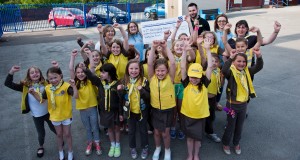 “We were all absolutely amazed when we discovered just how  much we were going to get from the Tamworth Co-op,” said Gaynor.

“We are really grateful to them and everybody who donated their dividends to us at village convenience store.”

The cheque was handed over by Phil Drury, manager of the Tamworth Co-op’s convenience store in Whittington.

“I was a cub once and I really understand the value of community organisations like this,” he said.

“It’s great that the money will help them mark the 100th anniversary of the Brownie movement.”

The pack was formed more than 40 years ago and 2014 has been an extraordinary year for the Brownies. In addition to receiving a cash windfall, they met the Duchess of Cornwall when she came to Whittington to open the new military medical centre.