Tamworth Samaritans have started the new year knowing their heating and lighting costs are covered thanks to another bumper donation from a treasure chest for good causes.

For the second time in a year the charity has been given a vital cash injection from Tamworth Co-operative Society’s Community Dividend Fund.

The grant of £3,000 comes on top of an award of £5,000 made a few months ago from the fund to the Samaritans branch which runs a free 24-hour helpline for people in crisis. 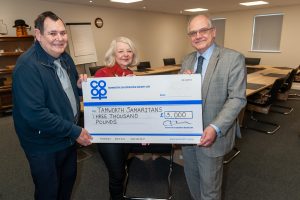 Alan King (left), chairman of the Tamworth Co-operative Society board of directors, and chief executive Julian Coles present a cheque for £3,000 to Judith Hepburn, director of Tamworth Samaritans.

The money is raised by shoppers generously donating the dividends they earn on their purchases.

Judith Hepburn, director of Tamworth Samaritans, was visibly moved when told how much the cheque was for.

She said: “I am again absolutely overwhelmed by the generosity of the Tamworth Co-op. This will keep us open for three to four months because we can use it to pay for our lights and heating. It is a significant amount and I don’t take any of it for granted.

“I know our callers value us and we make a difference. It is organisations like the Tamworth Co-op with its lovely sense of history and care that keep us in the town. It means such a lot to us.”

The presentation took place in the boardroom at Tamworth Co-op’s new head office in Colehill, opposite its former department store where it had been based since 1897.

Chief executive Julian Coles said: “We cannot thank the Samaritans enough for the work they do in the community. We are delighted to be able to help them. They have been our primary cause over the last year.

The group has also been able to refurbish the kitchen and buy new furniture for its premises at Manor House in Lichfield Street with the Community Dividend Fund cash.

Tamworth Samaritans, which has previously won the Queen’s Award for Voluntary Service, relies on donations to keep going. It has 85 volunteers who answer up to 800 calls a month in addition to replying to around 80 emails.

The Samaritans’ other activities include giving talks to schoolchildren in Tamworth and Lichfield on how to support their classmates if they are experiencing difficulties.

Not all those who get in touch are suicidal. Increasingly loneliness is a reason, while others have a mental or physical illness, or family problems they want to discuss.

*Anyone in distress or feeling alone can call Tamworth Samaritans on any phone on 116 123.