Churchgoers who packed out St Editha’s for Tamworth Co-op’s Christmas memorial service raised a record £993 in a collection held on the night.

The money has been shared between the church and the Alzheimer’s Society. It will help fund vital repairs to the historic church as well as boosting the work of the Alzheimer’s charity in Tamworth. 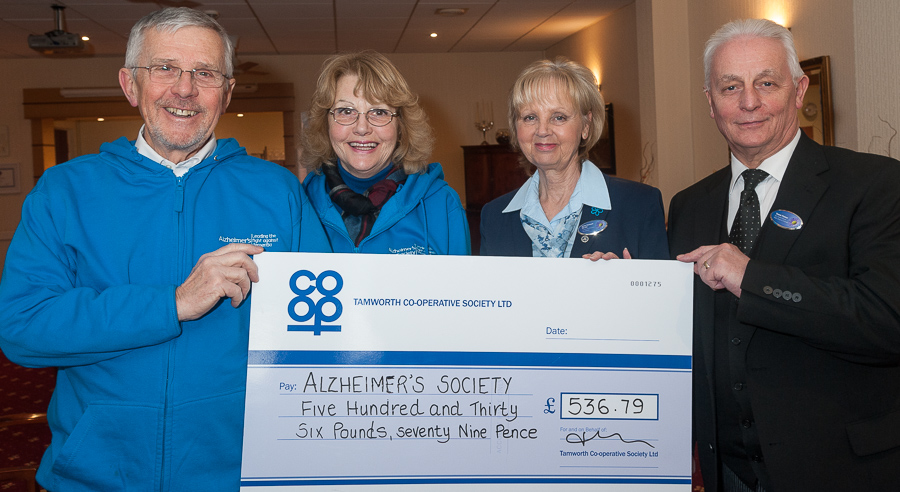 Reverend Alan Gordon, who led the service at St Editha’s, said he was extremely grateful to the congregation for ensuring the collection plates were filled to the brim.

“Our portion will go towards the many projects that we have on the go to keep our church open and the upkeep of the historical building,” he said.

“Top of the agenda is the tower and the stone staircase within the tower giving access to the nave and north aisle roofs. The steps are heavily worn and missing in part which is a hazard to anyone working in this area.”

David Barnes, a volunteer with the Alzheimer’s Society, said the organisation provided a range of support for those affected by the condition, which is the leading cause of death in women in the UK.

“Locally everyone given a diagnosis of dementia is contacted by an Alzheimer’s Society dementia support worker who will, if requested, supply information about the disease, including what benefits can be claimed and give advice on power of attorney.

“In addition to this, the Alzheimer’s Society runs Cognitive Stimulation sessions and Singing for the  Brain groups, both important ways to stimulate the brain.

“Other initiatives run by the Society, such as Dementia Friends and Dementia Friendly Communities, have also been very successful in the area, with Tamworth being shortlisted for an award for working towards becoming dementia friendly.

“Much of the work is carried out by volunteers and we always welcome more. There are many varied roles that need to be filled in this worthwhile charity.”

“The Christmas Memorial and Carol Service has become one of the main events of the year in Tamworth for families who want to remember their loved ones. This year the church was packed again with hundreds of people joining in the silent candlelit tribute, which is the centrepiece of the service.

“I would like to pay tribute to our funeral staff who work incredibly hard each year to organise this hugely popular service. Many families also tell us how much their support means to them when they are trying to cope with a bereavement.”