A charity whose members have been forced into self-isolation by the coronavirus pandemic has received a welcome boost with a £500 donation from Tamworth Co-op shoppers.

Customers of the fashion outlet in the former department store raised the money by handing over the value of their dividends to the SPIN (Special People in Need) group.

The cash from the co-operative society’s Community Dividend Fund scheme will pay for a special outing for the disabled and others with learning difficulties including autism and Down’s syndrome.

Philip White, non-food administration manager at the Tamworth Co-op fashion outlet in Colehill, said it was good to see the money going to such a worthy cause. 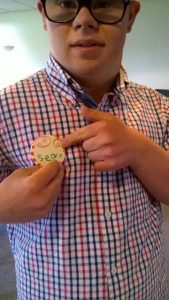 SPIN member Sean proudly shows off a badge which he made during a craft session.

“I’m so pleased that this donation will bring some cheer to SPIN members in these challenging times. Once the current restrictions are lifted, I’m sure they will appreciate more than ever the joy of a day out.”

Sylvia Geldard, a senior leader with the organisation, described the grant as ‘fantastic’, saying it would help lift the spirits of members who have been confined in their homes because of the lockdown.

“Many of our members have underlying health conditions which could affect them adversely if they were to catch the virus, and so they have had to self-isolate. A lot of them don’t understand why we are not open at the moment and keep asking if they can go back next week. It’s been very difficult for them, especially those with autism who have a fixed way of doing things. For them, the idea of social distancing is alien. So to have this funding now is such good news. We’re so grateful to the shoppers and Tamworth Co-op for their generosity.”

SPIN was formed in 1988 by a group of parents and carers of young people with special needs who formed a support network and met regularly to take part in activities. Since then it has evolved into a busy social club, with up to 100 members aged 14 and over from a wide area around Tamworth.

They usually meet every Wednesday evening during term-time at The Coton Centre in Comberford Road, where they can socialise over a game of pool and a range of other activities, supervised by qualified youth workers and volunteers, including crafts, drawing, table games, football, table tennis and curling. There is also a tuck shop and internally certificated life skills courses are run from time to time. Adult members meet at St John’s Rooms in John Street once a week for a chat and a coffee with the option to take up craft and artwork. In addition, there is an annual Prom, which had to be cancelled this year, a Summer Activity Week where members learn about personal safety and first aid, while also enjoying crafts and sports, and a Christmas party. They are also taken bowling.

SPIN secretary Lindsey Thompson said: “The money will be put towards a special event for our members. We were going to use it towards either our Prom or Summer Activity Week, but this is not possible in the present situation, but we will organise something for them later in the year if things get back to normal.”