Scouts in Tamworth will be going on a mass camp together this summer after a shortage of equipment initially threatened to spoil the fun.

Dosthill Scout Group has seen its numbers swell in recent months with the addition of two new sections for Beaver and Cubs. It meant there weren’t enough tents to go round for all the youngsters – until a cheque for £934 arrived from the Tamworth Co-op’s Community Dividend Fund.

Now all 102 members of the group will be attending the camp in Leicestershire, rather than having to split up. 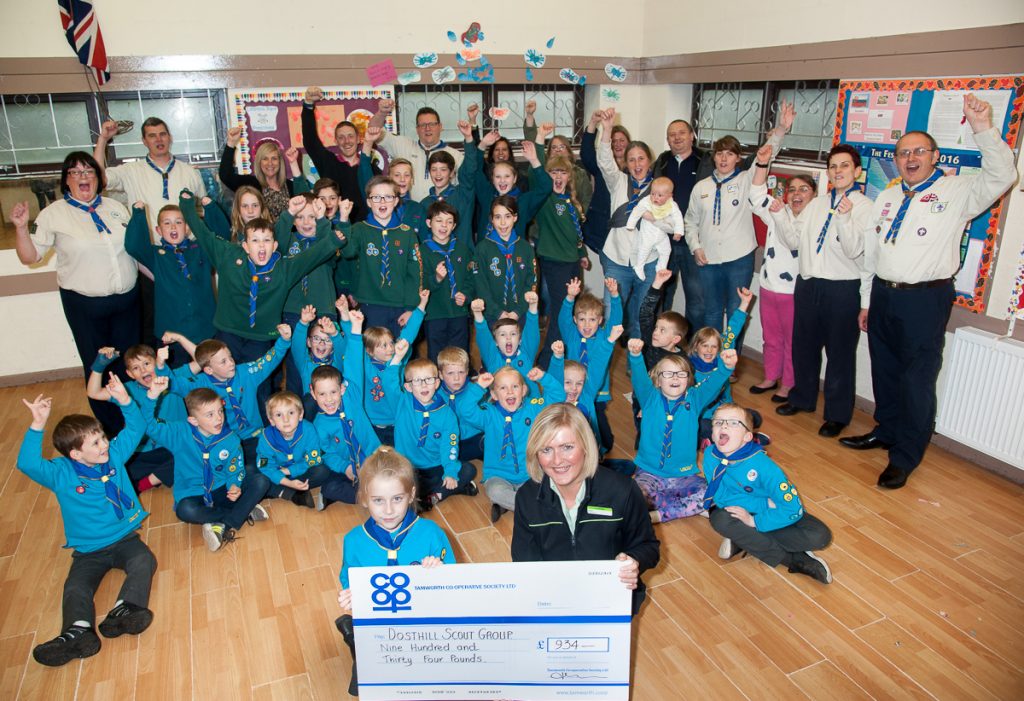 There were cheers when Dosthill Scout Group leader and Midlands commissioner Dan Potter announced the good news to the assembled Cub packs, Beaver colonies and Scouts.

“We’re really grateful to the Tamworth Co-op and its customers at the Dosthill convenience store for this donation,” he said.

“It couldn’t have come at a better time for us because we didn’t have enough tents. It will enable us to ensure everyone can go under canvas and we can all go together now, which is part of the fun,” he said.

The group’s youngest scout, Darcii-Mai Cobden (6) was given the honour of receiving the cheque from store manager Vicky Freeman who said: “As part of the Community Dividend Fund scheme we ask our customers to donate the dividends on their purchases to a good cause in the area. Their charity of choice this time was the Dosthill Scouts. It’s very satisfying to see this money going back into the neighbourhood we serve.”

The cash will buy an extra six tents and cooking equipment for the trip in July when the children, aged 6-14, will enjoy a range of activities including climbing, abseiling and archery.

The group, which consists of two Beaver colonies, two Cub packs and one Scout group and is run by 25 adult volunteers, meets five nights a week at its headquarters off Blackwood Road.

Around £10,000 is being distributed from the Community Dividend Fund in 2017 to schools and other worthy organisations in the Tamworth Co-op’s trading area.