A Tamworth school is to use a cash windfall to provide a sensory garden where pupils can ‘reflect, chat and relax.’

The project at William MacGregor Primary School in Glascote is being funded with a grant of £1,355 from Tamworth Co-operative Society’s Community Dividend Fund. Shoppers at the nearby Co-op convenience store raised the money by donating the dividends they earned on their purchases.

Headteacher Suzie Norton said the garden will help pupils de-stress after the challenges of the Covid pandemic.

“With all the children have been through these last two years, a place of calmness and stability is essential in their daily lives. Some of them are anxious about life at the moment, so anything we can do to help their mental health is a bonus. 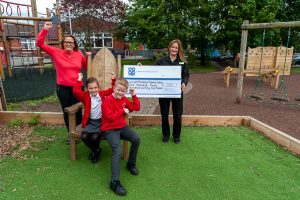 Jayne Cutforth, manager of Tamworth Co-op’s Glascote convenience store, hands over the cheque to William MacGregor Primary School head teacher Suzie Norton, who is pictured celebrating the windfall with two of her pupils.

“We have recently had our trim trail installed and our pond area renovated, and we now want to transform a section that we can’t currently use.  The plan is to turn it into a magical sensory garden where they can go for a quiet, relaxing time and enjoy some sensory experiences.

“The school council has set this as a school summer holiday project for the children to design ready for the work to be started in the next academic year.”

William MacGregor Primary School, which was once exclusively for boys, caters for 210 pupils aged between four and eleven. A section of the original building has been in place for 140 years and is part of the area’s heritage.

“We are of course named after the famous William MacGregor who began the Co-op in Tamworth and was a highly influential local figure,” added Mrs Norton.

“A huge thank you to everyone who has helped provide this very generous donation. The children at William MacGregor Primary School will greatly benefit from this money.  We could not even think about such a project without this donation. We would love to be able to invite the community in to see our final creation and use it in the future.”

This year’s Community Dividend Fund payments have been released earlier than usual and have exclusively benefited local schools. Co-op board members made the decision after being concerned about the pressure on educational budgets. A dozen schools in Tamworth Co-op’s trading areas have received more than £10,000 between them.

Jayne Cutforth, manager of the Glascote Co-op convenience store, who presented the cheque to the school, said:

“This is the largest cheque we have handed out in the current round of payments. Our founder whom the school is named after would no doubt be smiling down on us.

“The spirit of giving back to the community, which William MacGregor championed more than 130 years ago, is still at the heart of our ethos.”