Tamworth Co-op garage and MOT centre has topped up a new charity’s fundraising tank and reaffirmed its ongoing support. Tamworth Forever Fund aims to generate an ever increasing charity pot for generations to come. Cash donated to the fund is invested by experts at Staffordshire Community Foundation and Interest is divided between community groups on an annual basis. 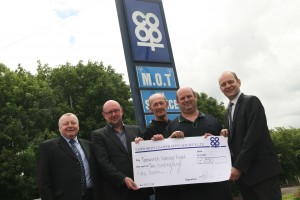 The initiative was launched at Tamworth Castle in April 2010 as a joint exercise between Tamworth Herald, Tamworth Borough Council, Tamworth CVS and Enigma Communications.

The charity received another £250 this week courtesy of the Tamworth Co-op’s Community Dividend Fund. Every year each Tamworth Co-op branch is allied to a different cause. Money is raised by customers donating the dividends they have earned on their purchases to the groups being supported

New beneficiaries are sought each year, with the exception of the Tamworth Forever Fund which has forged a permanent partnership with the Fazeley Road garage.

“This is the first time the garage has been involved in our Community Dividend Fund,” said Tamworth Cop-op chief executive Julian Coles.

“I hope that as we move forward we will see a growing awareness of both the Community Dividend scheme and the Forever Fund it supports.

“They are two very positive initiatives in Tamworth and can make a significant contribution to local life.”

A cheque for £250 was presented to Tamworth Herald editor Gary Phelps and Enigma Communications’ managing editor Phil Shanahan, who both serve on the board of the Tamworth Forever Fund.

“We really value this partnership and are delighted to receive the backing of the Tamworth Co-op on an annual basis,” said Mr Phelps.

“The Tamworth Co-op is an iconic and historic organisation and is well known for the way it supports the local community. This is yet another example of that.”

Tamworth Co-op garage manager Ian Cambage says he is delighted the garage is partnering such a strong local cause:

“I’d also like to remind all our customers that they can choose to donate the dividends they earn on MOTs, services or general car repairs to the Tamworth Forever Fund.”