A record turnout at Tamworth’s annual Christmas carol and memorial service has given a New Year’s boost to the funds of two organisations at the heart of the local community.

More than £900 was collected at the 2017 service which has now been split between St Editha’s Church, which hosted the occasion, and St Giles Hospice.

The donation will assist the church in completing much needed repairs to the roof and windows of the historic building, while helping St Giles to continue its work at the hospice and in the community.

The event, organised by Tamworth Co-op’s funeral division, was attended by more than 600 people who came together to remember their lost loved ones and celebrate the festive season. 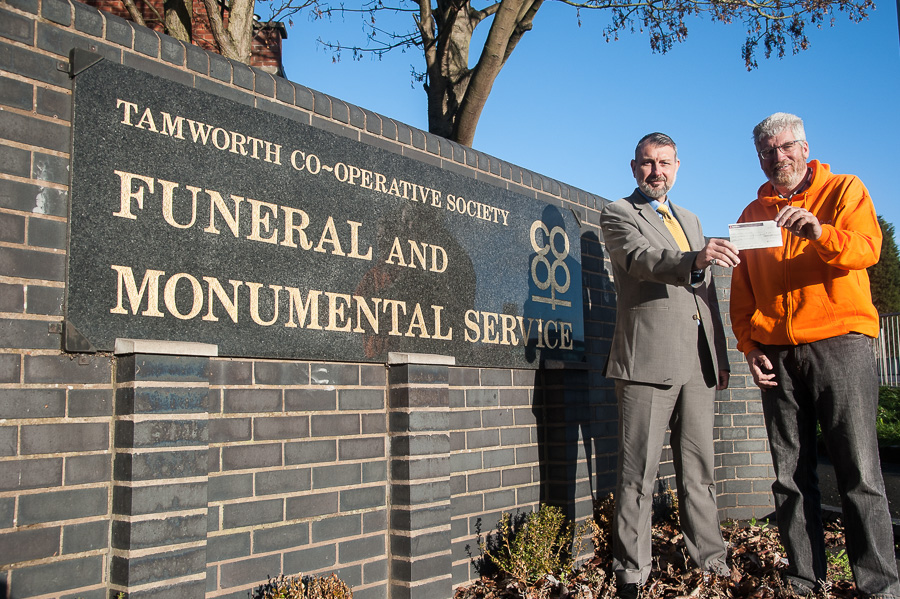 St Giles Hospice community engagement manager Ian Leech said the cash would make a real difference in helping it to provide care for people with incurable illnesses and supporting their families.

“It’s a fantastic amount and we’re very grateful for it. It costs around £9m a year to operate St Giles and £6m of that has to be found from within our communities. So we rely on donations like this.

“It will help us to support people in our communities and in our in-patient units. Last year we helped over 7,000 people in our catchment area, which covers Tamworth.”

The hospice has forged a successful partnership with Tamworth Co-op’s funeral service. In May 2017, they opened a pop-up shop in the town centre during Dying Matters Awareness Week to encourage people to talk openly about dying and to make plans for the end of life. A similar event is planned in 2018.

“So many people came along we ran out of orders of service and seats. We try not to dwell on it being a sombre occasion. The focus is on the silent candlelit tribute during the service which illuminates the church and gives everybody a glow in the heart.”

Reverend Alan Gordon, who conducted the service, said: “We’re very thankful to the congregration and Tamworth Co-op. Recently the chancel roof has had to be re-leaded and eight windows repaired at a total cost of £220,000. There are still some masonry repairs to do as well and when we’ve finished that we will need to replace some of the carpet at the altar which is a trip hazard. We also want to put the office and toilets into the church. We do get some grants, but there is a shortfall and we always need donations.”