Churchgoers put a generous £800 into the collection plate at a service held at St Editha’s. 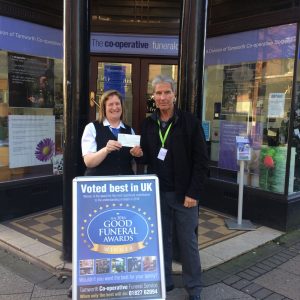 The money, raised at Tamworth Co-op’s annual memorial service, has been split between the church and the town’s Samaritans.

The event attracted a record turnout as families held candles aloft in silent tribute to loved ones.

Gerwyn Cooper, director of Tamworth Samaritans branch, which is self-financing, said: “I’m absolutely delighted. This money will go an awful long way. It will help us to update our telephone system and that is still the most important source of communication for us.

“We also have a promotional caravan outside St Editha’s Church on the first Wednesday of every month and this funding will help us update our publicity materials as well, including new leaflets specifically aimed at younger people.”

The branch relocated last August to new premises on the second floor of Manor House in Lichfield Street, having previously been based at the Philip Dix centre.

Over the festive period just gone by volunteers in Tamworth, who maintained a 24-hour service, were inundated with calls, emails and texts.

Around 20 volunteers attended the memorial service which was organised by the funeral division. 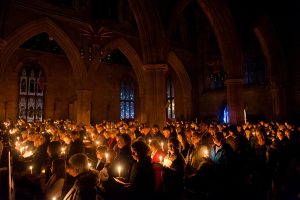 Members of the congregation hold candles aloft in silent tribute to loved ones at the Tamworth Co-op memorial service in St Editha’s.

Mr Cooper added: “The volunteers found the service extremely moving. None are paid and every single penny of this amount will go towards supporting callers.”

The donation to St Editha’s will be spent on the upkeep of the church which dates back to Saxon times 1,200 years ago. It has had a tumultuous history, having twice been destroyed by the Danes and ruined by a fire, only to be rebuilt each time.

The present Norman church contains a wealth of architectural features, including a rare example of a double helix staircase consisting of two flights of stairs winding one above the other.

Reverend Alan Gordon, vicar of St Editha’s, said: “The church of St Editha’s is an ongoing commitment and we’re really grateful to members of the community who have given so generously to continue to maintain the fabric of the building. I don’t think people could imagine the town without St Editha’s.”

“The service creates warmth and support for families who have lost people close to them. It’s wonderful that it has now raised a healthy amount for two organisations which are vital to the town.”

*For more information about Tamworth Samaritans visit www.samaritans.org/branches/samaritans-tamworth Anyone interested in becoming a volunteer can ring 07597 665143.