A special school which caters for pupils with a wide range of needs is splashing out on a new sensory garden and trail to provide new experiences in the playground.

Money for the new feature at Fountains High School has come from shoppers at the Co-operative Stretton convenience store in James Brindley Way. They donated the dividends they had earned on their purchases raising more than £500 for the school.

“Our students are very excited at having this new development which is really going to enhance the school grounds,” said deputy headteacher Bev Rowley.

“Some of them are already busy trying to find out ideas about what they would like in it. We are very grateful for this donation and are looking forward to buying the new equipment. 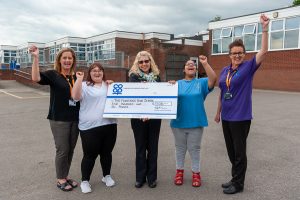 Marina Hutton, manager of the Co-op convenience store in Stretton, presents the cheque for £506 to two delighted students at the school. Looking on are Bev Rowley, deputy head teacher (left) and PA Kath Linstead (right).

Fountains High School is a generic special school catering for more than 200 students from East Staffordshire, Derbyshire and Leicestershire. It has more than 50 students based at its post 16 provision at Burton.

The school was opened in the late 1960s and originally only had about 50 students. Places are now very much sought after.

The donation was made as part of Tamworth Co-operative Society’s  Community Dividend Fund scheme which supports numerous causes in the areas it trades in. Every year each of its food stores is linked with a separate cause.

“It will allow us to buy more sensory equipment for our students. Our outdoor area is not very exciting at the moment due to us having to spend our money on other areas over recent years.

“We would like to say a massive thank you to Tamworth Co-op and its customers for being so kind and generous. Our students are already looking forward to having more things to play with outside. It will support our more complex students in having very valuable sensory experiences.”

She said that the cash, which has been released earlier than normal due to pressure on school budgets, will be particularly useful in helping the students recover from the trauma of the pandemic.

“Many of them have found the pandemic difficult to cope with. The changes in their routines have caused them some concerns. They will really benefit from playing outside after some have had repeated periods of self-isolation.”

Marina Hutton, manager of the Co-operative convenience store in Stretton, presented the cheque to the school. She said it was wonderful to see the money being spent on such a great facility.

“Knowing that this donation can help pupils to feel better after what they have been through over the past year or so makes it worth every penny,” she said.