The manager of Dordon’s new £1.6m Co-op food store led the celebrations on the first day of trading – 100 years after the original branch in the village was declared open.

Annette Brindley uncorked a bottle of bubbly in the impressive new entrance – two days after staff locked the doors for the final time at the old premises and made the short journey across from New Street to Whitehouse Road.

She said: “I’m excited to be the manager of this amazing new store, and it was lovely to get so much positive feedback from local people on the opening day.” 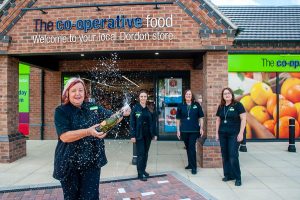 Annette Brindley, manager of the new Dordon Co-op, is pictured cracking open a bottle of bubbly to celebrate the unveiling of the store. Looking on are: (left to right) shop assistants Chloe Wood and Margaret Lees and senior supervisor Jodie Copeland.

The 3,000 sq.ft. Tamworth Co-op owned store is nearly three times the size of the old ‘No.1 branch,’ which opened on January 1, 1920 in a terraced building with no car park.

Its far grander successor is already proving popular with shoppers, many of whom could not believe the difference.

The Society celebrated the milestone by handing out 100 welcome bags containing complimentary bread, chocolate, cakes and money off vouchers to customers.

He said: “It served its purpose very well for a century, but it was much smaller and had no parking for customers or delivery vehicles. Now we are able to offer a much greater range of food and groceries, with parking for 20 cars, including two disabled bays, and an area where deliveries can be unloaded.

“We’re especially pleased to be able to say that while other shops have been closing all around us during the coronavirus pandemic, the Society has been able to open a new convenience store in Dordon and take on six extra staff.  We hope it will continue to serve generations of families, just like the old one did.” 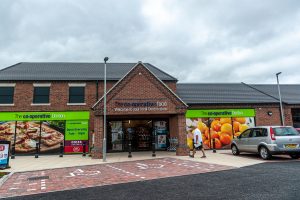 The new store also sells newspapers, magazines and alcohol, with an in-store bakery and a takeaway section for the purchase of Costa coffee, chilled drinks, make-your-own ice cream and hot food. The post office has also transferred from the previous store.

The Dordon Co-op stands on the site of the former Cuckoo’s Rest pub which was demolished to make way for the new building.

Work on the project started in autumn but had to be put back when the lockdown was introduced in March to halt the spread of Covid-19.

Maria Ross, 71, from Corbin Road, Dordon, was among the first customers to arrive, accompanied by her 10-year-old granddaughter Meka, and was immediately impressed.

She said: “I was working as a volunteer at the library and watched the store being built. I couldn’t wait for it to open. I was speculating what it would be. When I found out it that it was going to be a Co-op, I went ‘oh yes!’ It’s absolutely fantastic. The variety of things on offer is great and the fridges are beautiful. It’s a really lovely shop and I’m very happy it’s here. I like making biscuits but haven’t be able to find dark sugar anywhere until I came here. When I saw it on the shelf, I pounced on it.” 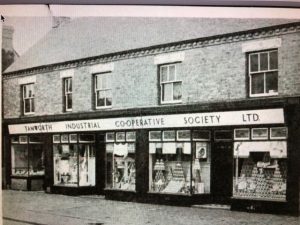 Planning permission has been approved to redevelop the site of the old Dordon Co-op to provide a small, housing development.

Julian Coles, chief executive of Tamworth Co-op, described the opening as a landmark day in the Society’s history.

“We first envisaged this new store seven years ago and it has taken an enormous amount of effort to bring it to fruition, but it has been worth every minute. I’m very proud of the staff who have worked extremely hard in a time of global crisis to get everything ready on time for the opening.”