Shoppers at Dosthill Co-op have generously donated their dividends to raise nearly £1,000 for the village Brownie pack.

The money will be used by the 2nd Dosthill Brownies, which celebrated its 50th anniversary last year, to fund trips, outdoor equipment and educational resources for the group. 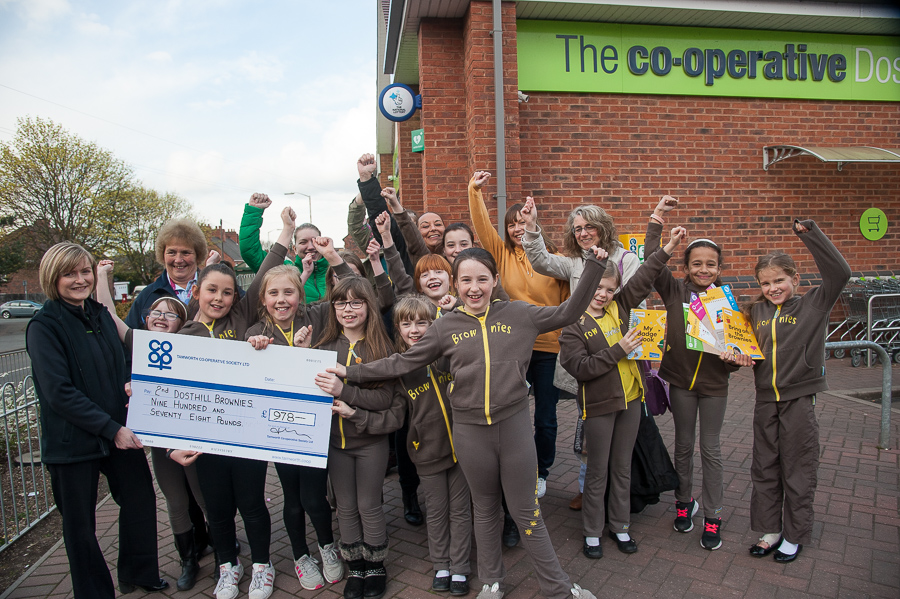 Vicky Freeman (left), manager of Dosthill Co-op, presents a cheque for £978 to the overjoyed 2nd Dosthill Brownies and their leader Jill Longhurst (second from left).

Vicky Freeman, manager of the Tamworth Co-op run store said “We’re delighted to be able to help provide new opportunities and experiences for the children in this popular village group. Every year we ask our customers to support a deserving cause by giving up the dividends they earn on their purchases and we always get a fantastic response.”

Jill Longhurst, leader of the 2nd Dosthill Brownies, who has been with the pack for 30 years, said they were ‘blown away’ by the £978 donation which will benefit 30 girls aged seven to 10.

“It’s an amazing amount of money for us to be given. We’re so grateful to the Tamworth Co-op and everybody who shops there for donating their dividends. It will make a huge difference and give us so many more opportunities. The girls are very active and are itching to do a sleepover in a glass tunnel at the Sea Life Centre in Birmingham, so that may well be one of the trips we do soon.

“We also need some outdoor equipment and more resources for the Brownies to study for their badges in a variety of subjects. These encourage them to think out of the box and give them the idea that anything is possible, and girls can do whatever they want to do. One is an aviation badge which involves having to design a model plane.”

The Tamworth Co-op Community Dividend Fund, now in its 10th year, gives thousands of pounds annually to community organisations, charities and schools in the area. Each of the Co-op’s 11 convenience stores, along with its supermarket and department store, adopts a worthy cause on its doorstep.