A Tamworth community radio station which informs and entertains thousands of listeners every week has been given essential funding from shoppers to keep it on air.

Customers at Tamworth Co-op’s Dosthill convenience store have donated their dividends to raise £868 for Radio Tamworth which is entirely run by volunteers.

The grant from the Community Dividend Fund scheme will pay for new equipment that will make it easier for studio anchors to cross live to presenters during outside broadcasts. 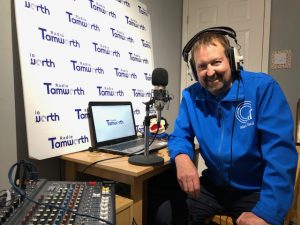 Vicky Freeman, manager of Dosthill Co-op, said shoppers were asked to nominate a deserving cause to receive their ‘divis’ and chose to support Radio Tamworth.

“I’m so pleased that we’re able to help the station with its excellent work in the community because it relies on fundraising to carry on broadcasting. During the coronavirus outbreak it has not just been a comfort, but also a lifeline to the local community. Its news bulletins, which have included updates on our own food delivery arrangements, have provided the elderly and vulnerable with vital information.”

Alex Farrell, managing director of Radio Tamworth, which operates 24-7 on 106.8fm, said the donation was invaluable

“It costs £12,000 a year to keep it on air, so we really do appreciate this help from Tamworth Co-op and its customers,” he said.

“We have about 12,000 listeners who tune in every week to listen to a mixture of news and music, and coverage of events such as school fairs, football matches and shop openings. In these difficult times, particularly, I think people turn to the radio. Radio Tamworth is like a friend to them. It is keeping them in touch with the latest news and local updates every half hour.”

He added: “We are trying to broadcast as normal. Technically, we are key workers, but practically it is difficult to have people working together in a small studio, so our volunteers are either pre-recording their shows or broadcasting from their homes and bedrooms.”

The station, based at Tamworth Youth Centre in Spinning School Lane, is run by about 30 dedicated volunteers who broadcast news and entertainment for all ages from 6am to midnight, with recorded music playing the rest of the time. They include a clown, who presents the breakfast show, a milkman, local councillors, teachers and students.

Mr Farrell joined when he was 17 and 12 years later is now working on the breakfast show for national talkRADIO. He still puts in an afternoon shift for Radio Tamworth.