Tamworth Co-op funeral staff will be setting up a continental style street café next week where locals can drop in for free refreshments… and chat about life and death. Don’t be put off, though, if you think the conversation at the ‘Death Café’ is likely to be heavier to digest than the complimentary cake. The whole idea of the al fresco event is get rid of the stigma surrounding the subject. 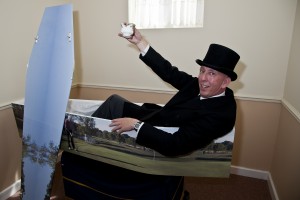 The café will be set up outside the Bereavement Advice Centre in Colehill, Tamworth on Tuesday, May 19 (10am-3pm). Organisers stress that is it is not a hard sell of funeral services, but a chance to talk informally with expert staff about any aspect of death and bereavement.

The Tamworth event is one of around 500 being organised across the UK as part of Dying Matters Awareness Week (May 18-24).

Amanda Woodward, general manager of the Tamworth Co-op’s funeral division, says one of the aims is to encourage people to plan well in advance the way they would like to bid goodbye to the world.

“You only die once and I think most of us would have a very individual take on how our funerals should be organised,” she said.

“However, in reality few of us leave any instructions to relatives who then have to decide on all the arrangements. That’s a great pity and we want to change that thinking by challenging people to plan their own funerals in advance.

“These days so much is possible with funerals. You don’t have to embark on your final journey in a black hearse. You can be taken by a fire engine, VW camper vans or even a Harley Davidson motorcycle.

“Coffins come in all shapes, colours and sizes. You can decide everything from the dress code for guests to what music is played. You can even write a final message to friends and relatives.”

A free food hamper is up for grabs for the person who comes up with the best suggestion of what they want to achieve before they die.

“In life it is vital to grasp the nettle or things might not go the way you want them too. We’ll be advising people to plan for both life and death. This is not a gloomy event. We want you to have the life you want – not just the send-off!”

To ensure people of all ages get the chance to put their own requests on paper, Amanda has compiled a ‘Your Funeral Wishes’ form.

Tamworth people can use the form to write down in detail exactly how they would like their funeral to be organised.

The form is not a commercial contract or a pre-paid funeral plan. It doesn’t even go back to the Co-op or tie anybody in to a particular funeral provider. It is simply a vehicle for people to leave behind written records of their personal wishes in their own homes.

Funeral wishes forms are available at all Tamworth Co-op funeral branches including the main premises in Upper Gungate and the Bereavement Advice Centre next to the main department store in Tamworth town centre. They can also be downloaded from www.myfuneralwishes.coop