Tamworth Co-op’s main funeral home has taken delivery of two vehicle screens which will enable it to lift its temporary ban on families travelling to services in traditional limousines.

The screens have been fitted into two luxury Jaguars at its Upper Gungate premises by two members of staff who just happen to have the perfect credentials for the job.

Funeral co-ordinator Trevor Palmer was previously the director of an engineering firm, while funeral director Paul Warwick is a highly skilled restorer of classic cars. He currently owns a vintage Rolls-Royce Silver Shadow and a 1970s Ford Cortina Mk II which has won numerous awards.

“We were very lucky to have these skilled guys on hand, and once the screens arrived they got to work straight away,” said Glen Speak, the funeral division’s deputy general manager.

“So many families during lockdown have been upset not to be able to follow behind the hearse in a limousine because of the coronavirus restrictions. It’s really important to many people to feel part of the cortege and formally participate in their loved one’s final journey. 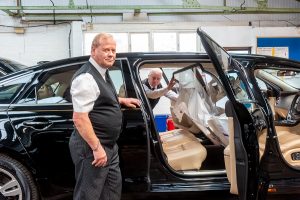 “It’s not just valuable because of that. Family members sit together while following the hearse and often discuss the good times they had with their relative. Whether the journey lasts 10 or 40 minutes, that gives them the chance to talk and support each other as a close-knit group, with nobody having to drive.

“Having that time to talk and reflect in the comfort of a luxury vehicle can have a calming effect on people. It’s almost like a therapy which some people say helps them to cope with the emotion of the day. We have been constantly asked about funeral cars, and it’s nice to be able to respond positively again. We can accommodate six mourners in each car.”

The hygienic, clear screens will be fitted from the ceiling to the floor and will follow the contours of the vehicle. Funeral staff will open and close the doors but will observe social distancing by standing two metres away from people entering and leaving the limousines.

Hand gel will be provided in all the vehicles, which will be scrupulously cleaned and sanitised between funerals.

“While this is a major step forward, we still have to follow strict procedures to ensure the safety of our staff and local families,” said Mr Speak.

For the first time since lockdown, families will also have the option of coming into the funeral home to go through the arrangements. However, they are still advised to communicate over the telephone and via email whenever possible.

“One thing that we have being doing differently during this period is that we send out all the brochures showing the choices available,” added Mr Speak. “We then help the families choose what suits them and their budget best over the phone. If people are keen to come into the building, then we will now allow that, but we will still send all the information in advance via email to help with the process.”

General manager Amanda Woodward said that the layout of the funeral home is being altered to make it more suitable for social distancing. 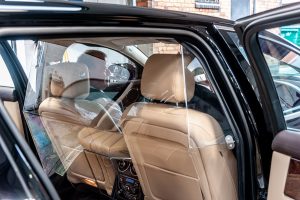 The new screen in place in one of Tamworth Co-op’s funeral cars.

“For example, we have been moving tables out of our private rooms and this will allow staff and relatives to observe social distancing in more of a lounge-style setting. We will continue to allow a two-metre gap between people, for the time being, even if the restriction is generally relaxed to one metre.”

She also revealed that no members of staff had been diagnosed with Covid-19 since the start of the pandemic.

“We’ve been following very strict procedures and our staff were already trained in dealing with infectious diseases such as SARS and bird flu. They were very well prepared for this challenge. We also bulked up on personal protection equipment when the outbreak happened. Some team members have had to self-isolate, but there have been no confirmed cases among our staff.

“During the first two weeks of June we have also noticed that the number of deaths we usually deal with have been close to the monthly average for June. At the peak of the pandemic, they were treble what we would have expected. Of course, we just hope it stays that way now and that people will continue to act responsibly when they come into contact with others.”

Similar vehicle screens will also be fitted to the remainder of the Tamworth Co-op funeral fleet serving its other branches in Coseley, Heath Hayes, Great Wyrley, Uttoxeter and Woodville.