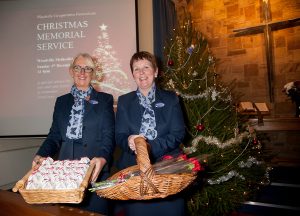 Funeral directors Lorraine Walker (left) and Angela Bowyer handed out flowers and electric candles to the congregation for them to take home in memory of loved ones.

Young and old came together to remember lost loved ones in a moving service designed to bring comfort to the bereaved over Christmas.

Dozens of candles were lit in memory of relatives and friends during the memorial service at Woodville Methodist Church.

There was also a moment of quiet reflection before the congregation was invited to take part in an act of remembrance.

Each person was given a candle and a card on which to write a message for their relative or friend, which they could place in a prayer basket. They then filed past a table, where the candles were lit, to receive a red carnation and a heart box as a keepsake.

Many were moved to tears. Others comforted each other while music was played and the lights were dimmed. 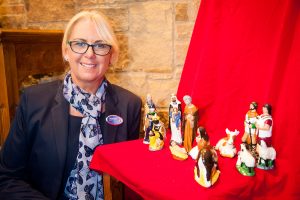 Funeral director Lorraine Walker pictured with a nativity scene on display during the Christmas Memorial Service at Woodville Methodist Church.

Both the candles and the cards, described as symbols of love, were blessed during the event, organised for the first time by Tamworth Co-op funeral division’s Woodville branch.

Guests were also given gift bags to take home. They included a heart-shaped packet of wildflower seeds to plant in the garden as a reminder of their loved one, as well as chocolates and a pocket diary.

Angela Bowyer, bereavement community support co-ordinator for Woodville Co-operative Funeralcare, told the gathering: “We hope this service offers you hope and comfort. It’s very difficult when you lose a loved one, particularly at Christmastime, and that’s why we felt it was important to put this service together for you and your families.” 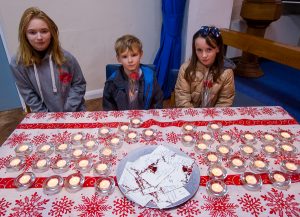 Reverend Sue Rolls, minister of Woodville Methodist Church, gave an address, praying for peace within all who mourned.

Mrs Bowyer and her colleague, funeral director Lorraine Walker, read the poems Light A Candle and Feel No Guilt In Laughter.

Amanda Woodward, general manager of the funeral service, gave the closing thanks, praising Mrs Bowyer and Mrs Walker for the work they do in the community, saying it went ‘way beyond their normal duties.’

The afternoon ended with a Gaelic blessing from Rev Rolls, wishing ‘deep peace for you.’ 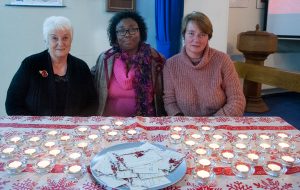 Left to right: Mary Homer remembered her sister Rosemarie Nicholls, Racquel Hickling reflected on six family members who died in 2016 and Emma Watkins was at the service to pay tribute to her partner Clive Sellek who also died in 2016 from motor neurone disease.

Racquel Hickling, a receptionist at Woodville Surgery, was remembering six family members who died in 2016, including her father George Campbell.

She said: “The service was beautifully done. It was very moving. The mood of it, and everything, brought comfort and peace to my heart.”

Afterwards hot drinks and mince pies were served. All donations received will be given to St Giles Hospice.

*Woodville Co-operative Funeralcare in Granville Street held a Tree of Memories Day on December 8 for people to write a message in memory of someone special on a card and place it on the Christmas tree. Refreshments were also served.

“People can still leave a message by either ringing the funeral home on 01283 217237 or calling in with a card on a different date throughout December,” added Mrs Walker.