Tamworth’s emergency first responder team has received a significant injection of cash after food shoppers in the town gave up their loyalty rewards to support the life-saving service.

Customers at Tamworth Co-op supermarket donated the dividends earned on their purchases to raise a healthy £1,765 for Tame Community First Responders.

It is the largest amount to be handed out in 2018 as part of Tamworth Co-op’s Community Dividend Fund scheme which ploughs around £10,000 annually into good local causes. 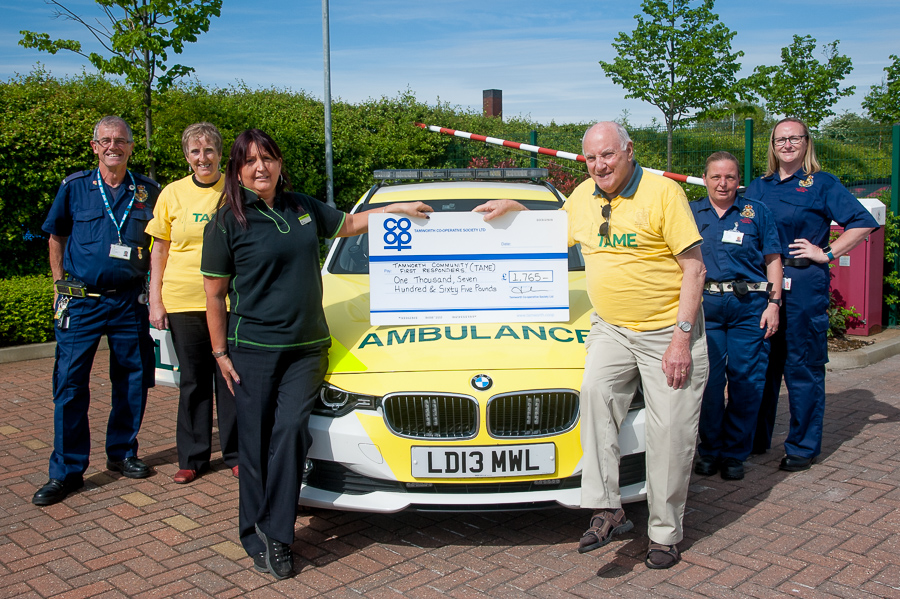 The first responder group is run entirely by volunteers who depend on donations to keep their rapid response vehicle on the road. At times they provide the sole, initial 999 response for the Tamworth area when ambulance crews are busy in other parts of the region.

Some of the money will be spent on fitting a pull-out storage rack in the boot of the vehicle so that it is easier to lift heavy patient monitor equipment in and out. The rest will go on installing an enhanced rear camera system to protect the BMW estate car from vandalism.

Ken Hughes, chairman of Tame Community First Responders, said: “We are so grateful to the Co-op and the shoppers for this money. It really is a boost.

“We get a fuel allowance from the West Midlands Ambulance Service and oxygen, but otherwise we have to provide our own equipment and uniforms. We are also trying to build up our funds to eventually buy a new car and kit. So receiving support like this is vital for us.”

Julie Clark, manager of Tamworth Co-op supermarket, said: “This is such an essential service because it can save people’s lives. We have had a wonderful response from our shoppers this year and I’m so pleased to have been able to hand over such a large sum of money.”

Tame Community First Responders was set up by co-ordinator Keith Dawson and has been in operation since 2010. A total of 12 first responders provide immediate life-saving treatment while an ambulance is on the way. They answer thousands of calls a year, ranging from accidents to medical emergencies, such as people with breathing or chest problems, diabetes and epilepsy.

The volunteers include a police officer, a nurse and others in full-time work who dedicate their spare time to assisting patients before paramedics arrive on the scene.