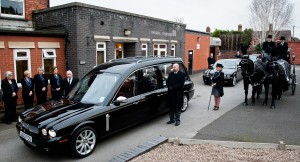 John Leonard Scriven, who died recently at the age of 83, was taken on his final journey to St Chad’s Church, Hopwas in a horse-drawn hearse.

Other members of the Co-op staff lined up outside the building in a silent tribute to Mr Scriven who retired from the Tamworth Co-operative Society in 1996. The Society remained a big part of his life and he kept in touch with former colleagues as a member of the Society’s Long Service Association. 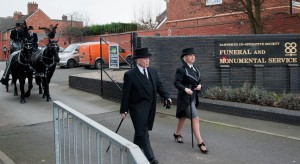 Amanda Woodward and Bill Galvin lead the funeral cortege out of the Tamworth Co-op’s main funeral premises in Upper Gungate.

Mr Scriven will be remembered by thousands of Tamworth families for the compassionate and professional way he managed their loved ones’ funerals.

Amanda Woodward said Mr Scriven had been a major influence on her own career.

After the service a wake was held aptly at the Tamworth Co-op’s own catering suite which Mr Scriven set up during his long and distinguished career.