Staff at a Tamworth pre-school say they are overwhelmed by the generosity of shoppers who have raised £1,305 for the group by giving up the rewards earned on their purchases.

The cash will be used by St Gabriel’s Pre-school to buy new equipment for a garden, where youngsters can explore their environment and play. 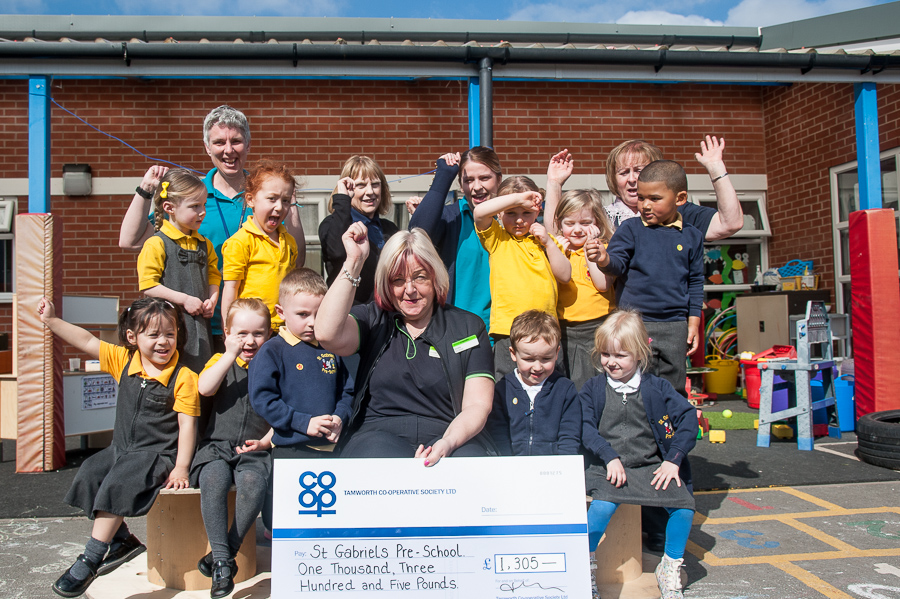 Annette Brindley, manager of Glascote Co-op, presents a cheque for the money raised by customers, to Theresa Miller (centre), manager of St Gabriel’s Pre-school. Pictured celebrating with her are some of the children who attend the group and pre-school practitioners (left to right) Louise Vernon, Mary-Jane Marshall and Karen Konopka.

She said: “Our shoppers nominated the pre-school to receive their dividends and we’re delighted to be able to support the organisation with such a sizeable donation. It will make a real difference to the resources they’re able to provide.”

Theresa Miller, manager of St Gabriel’s Pre-school, said the group was ‘absolutely overwhelmed and amazed’ by the response from shoppers at the convenience store.

“We really can’t thank them enough for their generosity,” she said. “It will give us the opportunity to develop our outdoor space, which we’re very lucky to have, so that the children have got lots of things to explore and do.

“We plan to buy new bikes and outdoor tables that they can work on, as well as pots and pans for a kitchen in the garden, and other resources, such as discovery pits with sand in them. We also have an allotment where they can see vegetables growing and take them home.”

The pre-school was set up in 1998 and caters for 48 children aged three to four who are given a variety of indoor and outdoor activities designed to prepare them for school. They learn the basics of reading and number recognition, along with other key skills, such as how to hold a book.

The Community Dividend Fund, now in its tenth year, distributes thousands of pounds each year to schools, charities and clubs. Each of Tamworth Co-op’s eleven convenience stores, along with its department store and supermarket, adopt a deserving cause to support, based on their customers’ nominations.