An award-winning organisation which provides free activities and job advice to thousands of people is celebrating after receiving a huge windfall from the Tamworth Co-op Cash in the Bag scheme. 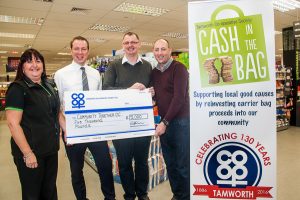 Community Together, which was presented with the Queen’s Award for Voluntary Service last year, has been given £5,000 from the recently launched initiative to continue its work in Tamworth.

The money has come from shoppers paying the 5p charge on plastic bags introduced by the Government in October 2015. The sale of carrier bags in Tamworth Co-op stores has raised £20,000 which is being donated to four charities, including Starfish, Heart of Tamworth and Community Together. The name of the fourth group to benefit will be announced shortly.

Lee Bates, projector co-ordinator for Community Together, said: “We cannot thank Tamworth Co-op and its customers enough. In the current climate, there are fewer funding pots out there and they are always over-subscribed. This is why this money from the Cash in the Bag scheme is so important for us. It will go towards supporting all of our activities, most of which are free or very low cost. This funding will help us to maintain that and keep our services accessible.”

Steve Hodgetts, director of operations for the non for profit Community Interest Company, said: “This is absolutely stunning and has come as a complete surprise. It’s nice that the money will be going back into the local community.”

The organisation, supported by 54 volunteers, runs a network of community cafés across the town where people can enjoy a host of activities, such as arts and crafts, bingo, quizzes and table games. Refreshments are cheap – everything costs 50p or less – and visitors can also pick up information about local services or simply drop in for a chat.

Mr Bates, a former Mayor of Tamworth, said the first community café opened in Wilnecote in 2007 as a way of bringing young and elderly people together.

“During my work as a councillor I became aware of complaints from elderly residents about young people hanging around on the street. Even though they weren’t doing anything wrong, many of the old people felt intimidated by them. The community café was opened to bring these two groups together. We had a pool table and a Wii video game. The young people taught the older residents how to play the Wii and in time the complaints got less and less.

“In fact one 90-year- old lady, who had felt quite intimidated by the young people and would cross the road to avoid them, is on first name terms with them now.”

Since then more cafés have been opened in Amington, Belgrave, Glascote and Stonydelph, along with the Community Together CIC Hub which was unveiled last August in the Castle Grounds.

The group received funding from the Big Lottery to refurbish the former outdoor swimming baths at a cost of £23,000. From this base it offers a programme of fun activities for all ages and a café serving healthy food and drink.

Community Together also holds job clubs, giving free advice on skills such as CV writing and interview techniques. Between February 2015 and January 2016, 623 people used this service, with 60 per cent finding work within a year of attending one of the clubs. Other services include community exercise classes, cooking healthy food on a budget, befriending sessions and youth clubs.

Dan Welsh, general manager of Tamworth Co-op’s food division, said: “We are delighted to be able to put the proceeds from the carrier bag sales back into the community through such an outstanding organisation as Community Together.”