A group of volunteers dedicated to enhancing the enjoyment of Warwickshire Moor for both humans and wildlife have praised the Tamworth Co-operative Society for supporting their efforts over the past two years.
The Friends of Warwickshire Moor have been handed a cheque for £850 from the Tamworth Co-operative Society’s Community Dividend Fund. Secretary Pam Clarke said the support the group has received from the Society has proved invaluable. 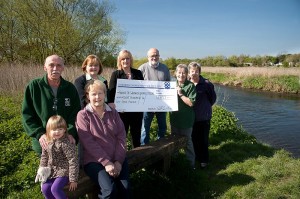 Anne Briggs, manager of Tamworth Co-op’s Bolehall convenience store hands over the cheque to the Friends of Warwickshire Moor.

“We also had a very large cheque from them in 2013 and we are extremely grateful to the Society and also to the shoppers who have donated their dividends to us at the Bolehall convenience store,” she said.

“During the past few years we have been laying down a board walk to provide a circular walk and this money will enable us to complete another stretch. It is wonderful that the Tamworth Co-op is prepared to put something back in the community. To have received nearly £2,000 in the past two years is fantastic.”
Thanks to the group’s efforts Warwickshire Moor is now an official nature reserve and a place where wildlife is increasingly flourishing.
“We have a lot of different types of birds, butterflies, dragonflies, harvest mice, foxes, badgers and there have even been deer here,” she said.
“The river is also home to fish such as roach, chub, perch, barbel and pike.”
Anne Briggs, manager of the Tamworth Co-op convenience store in Bolehall, said she was delighted to be able to hand over such a large amount of money to the group.
“These people do a fantastic job in their own time and really deserve this support,” she said.
The group is desperate for new volunteers to bolster their efforts to preserve and improve the moor. Anybody interested in joining The Friends of Warwickshire Moor should call Tom Barker on 07968 495494.
This year the Tamworth Co-op will be presenting 16 cheques totalling more than £11,000 to various community groups in the area it serves. More than £40,000 has been handed out to a large number of community initiatives during the four years of the scheme.