Money raised by shoppers at Tamworth Co-op’s convenience store in Dordon will enable a children’s nursery in the village to buy much-needed outdoor play equipment.

Kind-hearted customers at the store in New Street donated the value of their dividends to hand over £500 to the Jack and Jill Pre-School Nursery.

Sue Hill, co-founder and director of the nursery, said the grant from Tamworth Co-operative Society’s Community Dividend Fund, had come at just the right time.

“We had no idea we were getting this money. It was a lovely surprise when we got the call to say the shoppers had donated their dividends to us. 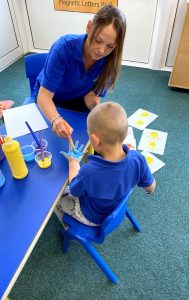 Children at Dordon’s Jack and Jill Pre-School Nursery will soon have new toys thanks to Tamworth Co-op shoppers.

“Some of our outdoor play equipment is old and needs replacing. We’ve got some push-along toy cars and two of them have broken. We’ve also got a climbing frame that’s cracked, so this money will enable us to replace them and also buy some weaving boards and wooden blocks, which can be used indoors too.

Emily Hopkins, supervisor at the Tamworth Co-op run store, said the customers would be pleased to know their ‘divis’ were helping an organisation right on their doorstep.

“It works very well because they get rewarded for shopping with us and, at the same time, they get the chance to put something back into the community. In past years we have helped a whole host of different groups locally which provide recreational and educational facilities.”

The Jack and Jill nursery is a non-profit making limited company which also has charitable status and will be celebrating its 32nd year of operation in September 2020. It caters for youngsters from the age of 18 months, helping to prepare them for when they start school, and also runs a before and after school club. The latter is still closed because of the lockdown restrictions. However, the nursery, based in three classrooms off Dordon Community Primary School reopened at the beginning of June.

Children learn through a variety of play activities, including listening to stories, singing and playing with toys.

Mrs Hill said they had adapted well to the new rules aimed at preventing the spread of the coronavirus. Their temperature is taken when they arrive to check they are not infected and there is a strict cleaning regime in place including hand sanitising and disinfecting toys. Tape has also been put down on the carpets to maintain social distancing and they are grouped in small social bubbles as an extra precaution. None of the 12 staff have had the virus, nor any of the eight children who have so far returned, she added.

Before the lockdown was imposed in March there were 56 children on the nursery’s books. The wages of staff are being paid through the government funding of childcare for three-year-olds.