The general manager of Tamworth Co-op ‘s funeral division says the recent ‘Dying Matters Awareness Week’ served as a timely reminder for people of all ages to plan their own funerals.

Amanda Woodward, who heads up a 35-strong funeral team, believes 90 per cent of local people die without having discussed, never mind planned, their final goodbye.

“It’s not that people wouldn’t want a say in how their funeral is organised, it’s more that they don’t think about death, let alone plan for it,” she said. 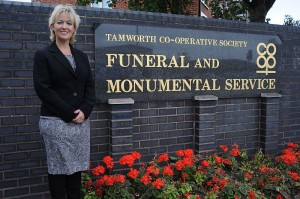 “I know it is a difficult subject, but given the chance, I believe virtually everybody would want to shape their own send-off, especially in this day and age when funerals can be incredibly personal. It is a tough subject to face up to, but death is something which will come to every single one of us.

“Hopefully Dying Matters Awareness Week helped to focus people on the subject and encouraged them to plan their own funerals. This is their chance to personalise the way they say goodbye to the world.”

Amanda says many Tamworth people might not realise how the funeral world has changed. She has seen ‘dramatic changes’ during her time at Tamworth Co-op’s main funeral office in Upper Gungate.

“At one time it was just about a traditional funeral service on a religious theme,” she said.

“Maybe that’s another reason people don’t plan their own funerals  – they’re not aware of the possibilities these days.

“In recent years I’ve come across people who want their ashes to be dispersed by fireworks. We had a pink coffin and a pink hearse for a lady who adored that colour, and we even had a coffin built in the shape of a skip for a scrapyard owner. He was also buried with a lot of scrap metal too. That was one of the more unusual requests we have had.

“Many people, though, still prefer the dignity of a more formal funeral on traditional lines. They can obviously request that and decide what hymns or Bible readings they want.”

To ensure people of all ages get the chance to put their own requests on paper, Amanda compiled a ‘My Funeral Wishes’ form. The idea is for Tamworth people to write down exactly how they would like their funeral to be organised. It can even include details such as what they would like to wear for their final journey, what music they would want to bow out to and what colour their coffin should be.

The choices are endless. You can swap the hearse for a VW camper van, have your casket branded with the livery of your favourite football team, band or Army regiment, and specify the dress code for guests.

But Amanda stresses that the form is not a commercial contract or a pre-paid funeral plan. It doesn’t even go back to the Co-op or tie anybody in to a particular funeral provider. It is simply a vehicle for people to leave behind written records of their personal wishes in their own homes.

“In a sense it works in a similar way to a kidney donor card,” she explained.

“It is an expression of a wish, should the unexpected happen. It’s a set of guidelines that you keep safe regarding what you want to happen after your death. The people you leave behind will then know what you want. That is a good thing because usually there is nothing for loved ones to go on. They have to make all the funeral choices at a time when they are often confused and emotional.

“We hope this scheme will result in far more Tamworth people having control over how their lives are ultimately celebrated.”

Funeral Wishes forms are available free at all Tamworth Co-op funeral branches including the main premises in Upper Gungate and the Bereavement Advice Centre next to the main department store in Tamworth town centre. They can also be downloaded from www.myfuneralwishes.coop