Tamworth Co-op’s home delivery food service dating back to 1886 went into overdrive during lockdown and is continuing to play a frontline role at the heart of the community.

Demand for Tamworth Co-op supermarket’s doorstep deliveries hit the roof when families were ordered to stay at home – and the service is still proving to be a lifeline to those self-isolating.

At the peak of the crisis, the Church Street store was despatching 60 orders a day to households within a ten-mile radius of the town and had to bring in extra staff to cope. Before coronavirus struck, it made just 25-30 deliveries per week to regular customers. 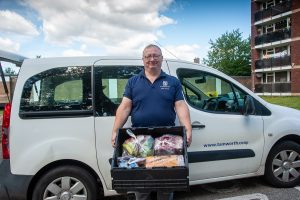 Dan Welsh, general manager of Tamworth Co-op’s food division, said since the restrictions had been eased it had retained 70 per cent of the new customers

He said: “We were proactive in contacting community groups, such as Tamworth Self Isolation Support Group, to see if there were people who we could help. This gave us a lot of leads and enabled us to support many of those who were self-isolating or shielding and couldn’t leave their homes to do shopping.

“We found there was an urgent need for help as the large supermarkets couldn’t offer delivery slots for up to four weeks, whereas we could get essential food and other supplies to people the next day. In many cases, we have even delivered orders on the same day.”

Mr Welsh added: “We had to draft in extra staff, including a new driver and re-purpose another of our vehicles to support the delivery vans. We also redeployed staff from our town centre fashion outlet which was forced to temporarily close because of the Covid-19 situation.

“It’s been a crazy and demanding period for us. However, it’s also been exceptionally rewarding. We’ve had so many people telling us how valuable our service has been, and the staff taking the orders have been receiving thank you cards. In addition to organising deliveries, they have proved to be a point of contact for many lonely people and have offered community support in that sense too.”

Julian Coles, chief executive of Tamworth Co-operative Society, said: “For many years our home food deliveries have been ticking along in the background and have mainly been used by the elderly and housebound. Many people love the fact they can just phone in their orders the old fashioned way.

“However, this service is for everybody – young or old, we don’t turn anybody away. The Covid period has made a lot of people more appreciative of local services. People like the fact that they don’t have to have a computer to order – if they don’t want to email us, they can phone us or use their order book.” 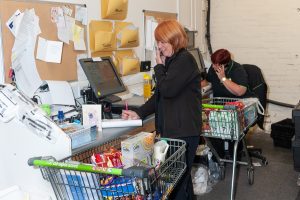 Shoppers have described the service as a lifesaver. Clive Richardson, from Wood End, is one of the new customers to come on board. The 69-year-old retired builder had to shield every day for three months because he suffers from an autoimmune disease.

He said: “My wife Sally and I tried to sign up for a home delivery with one of the big supermarkets but found out we would have to wait weeks for a delivery, so we contacted Tamworth Co-op supermarket.

“They said we can deliver tomorrow. I thought it sounded too good to be true. We sent our order via email first thing in the morning and had the delivery the same day. Every time since it’s been the same day. They are even better than they say they are!

“You don’t realise how vulnerable you are until things like this happen. We will be eternally grateful to the Tamworth Co-op and we’ll certainly keep using this service. The staff are brilliant – nothing is too much trouble.”

Una Payne, who has been blind since she had a brain tumour at the age of 16, has had her shopping delivered by the supermarket to her home in Leyfields for the past 20 years. She says she could not manage without it during the pandemic.

Now in her seventies, she said: “It’s a massive lifeline. I rely heavily on the Tamworth Co-op. I do a big order once a month. Usually my daughter brings the order book in, but during lockdown she couldn’t do that, so I used to ring up myself.

“The staff are such nice people. The driver has a chat with me and tells me where the shopping is. It’s a very personal service, and so important, especially if you’re housebound.” 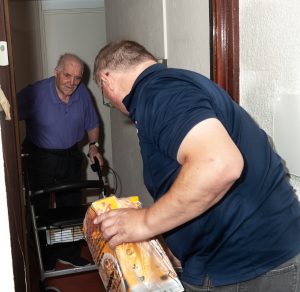 Norman Bates, 94, a resident at Weymouth House, comes to the door to pick up his shopping from Steve Hawkins. Norman says he could not cope without the Tamworth Co-op deliveries.

94-year-old Norman Bates, who lives on his own in a town centre flat at Weymouth House, has his food ordered for him by his niece Ann, from Manchester. He described the deliveries as “absolutely marvellous,” saying he did not know how he would cope without them.

“They knock on the door and stand back, and then pop the bags just inside the hallway for me.”

Sue Holley, 75, and her husband Ken, 80, from Coton Green, both have health problems and have used the service for more than four years.

“My husband broke both his legs in the space of 18 months. I have my health issues too and we’re both pretty much housebound. Even now we’re still self-isolating because of our vulnerability. We’re so grateful to the staff at Tamworth Co-op. We put our order in before 1.30pm and pay over the phone. Then they leave it in the porch. It’s so convenient. You need a computer for the other delivery services.”

Steve Hawkins, a former manager of the furniture section at Tamworth Co-op department store, is one of the four delivery drivers. He was made redundant when his floor closed but answered an SOS call to come back and help out in a very different role.

He says he is loving his new job and getting a lot of pleasure from ‘making a difference’ to people’s lives in unprecedented times.

“Quite a few of the old folk we deliver to live in flats and can’t get out very easily to do their shopping. As well as getting their supplies, they like to have a chat. It reassures them there are people around to give them support, especially if they’re on their own. They appreciate a silly joke and a smile. They like the human contact.”