Generous shoppers have handed over their ‘divi’ money to help train the next generation of fighter pilots and improve the job prospects of young people.

Customers at the Tamworth Co-operative Society’s Stretton store in James Brindley Way raised £741 for the 351 Squadron Air Training Corps in Burton-on-Trent by donating the dividends earned on their purchases.

The money, from the Society’s Community Dividend Fund, will be spent on adventure training equipment for the air cadets. As well as learning to fly, they take part in a range of other activities, such as canoeing, gliding, shooting and sports. 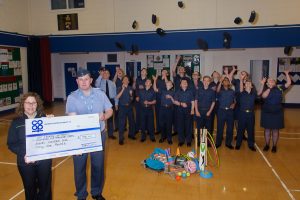 Air cadets celebrate as Marina Hutton, manager of the Tamworth Co-op convenience store in Stretton, presents a cheque for £741 to Jon Evans, commanding officer of 351 (Burton-on-Trent) Squadron Air Training Corps. The cadets include 19-year-old Cadet Warrant Officer Brad Taylor (back row, left) who is hoping to join the RAF as a weapon systems operator.

The 351 squadron has around 30 members aged 12 to 20 who meet twice a week for parade nights at Coltman House in Hawkins Lane. They also attend camps, sampling the great outdoors and learning to be part of a disciplined unit with ranks similar to the RAF.

Sector commander, Flight Lieutenant Colin Haynes, said: “Air cadet squadrons cannot survive without organisations like the Co-op. We have over 30 squadrons within the Staffordshire wing and they fit in with the Co-op ethos of being inclusive. Our cadets come from all sorts of backgrounds and we share with them the values of the air force, as well as promoting good citizenship. We also help them with their CV writing and job interview techniques.”

Marina Hutton, manager of the Stretton store, who presented a cheque for the cash raised to the squadron’s commanding officer Jon Evans, said: “My sister was in the Air Training Corps and I know what good work they do. The Community Dividend Fund distributes thousands of pounds each year to good causes.”

Squadron commanding officer Jon Evans said: “We’re extremely grateful to the shoppers and the Tamworth Co-op for this donation which will provide the cadets with a wide variety of opportunities, including participating in the Duke of Edinburgh scheme.”

Whilst the squadron is sponsored by the RAF, it is not a recruitment agency for the air force. The ATC provides training which will be useful in the services and civilian life. Many ex-cadets go on to other careers, like the runner Linford Christie OBE and former James Bond actor Timothy Dalton.

Sandra Evitts, 351 Squadron’s civilian committee chair person, said: “My son Jack who is 17 wanted to fly fighter planes but found he was too tall. Now he wants to be an air traffic controller. The Air Training Corps gives young people the confidence to go out into the big, wide world.”