More than 300 Tamworth pupils enjoyed a surprise announcement during their morning assembly. Richard Osborn, head teacher of Coton Green Primary School, told the delighted youngsters that he had received a cheque for nearly £1,300 from the Tamworth Co-op. To loud cheers he then revealed that the school council had decided the money should be spent on colourful board games for the play area. They include word puzzles and even a penalty shoot-out. 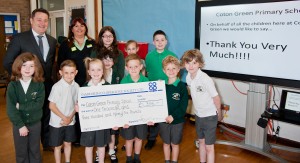 The money was raised by shoppers at the Tamworth Co-op supermarket in Church Street donating the dividends they have earned on their purchases to the school.

Each Tamworth Co-op outlet supports a different cause and the Community Dividend Fund has paid out more than £40,000 during the past four years.

Mr Osborn described the scheme as ‘fantastic’ and said he was amazed by the amount raised.

“This money will benefit the entire school because all the pupils will be able to enjoy the board games. The boards are also very colourful and will help brighten up the play area. There is a learning benefit to this, but the emphasis is on having fun.”

He said the school is very grateful to both the Tamworth Co-op and to all the supermarket shoppers who donated their dividends.
Supermarket manager Julie Clark, who was a special guest at the assembly, said: “We’re delighted to have been able to support the school and think they have used the money very wisely,” she said.