It was a night to remember as hundreds of people flocked to St Editha’s for the Tamworth Co-operative Society’s annual carol and memorial service. 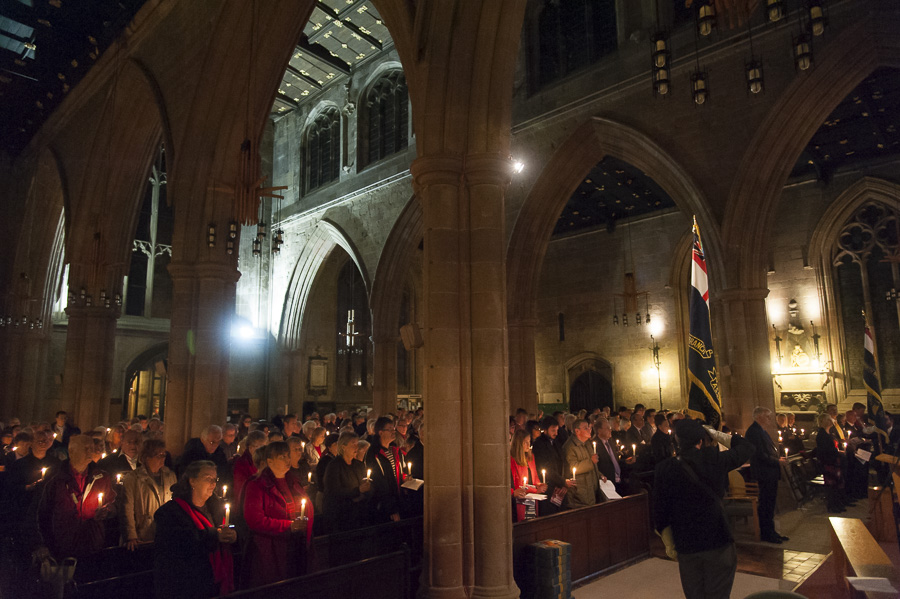 Hundreds of people packed St Editha’s Church in Tamworth to remember their lost loved ones.

From the booming voice of singer Tom Clamp reverberating around the walls of the church to the silent, candlelit tribute by those paying their respects to lost loved ones, this was an emotionally charged evening that left many wiping away the tears.

It was the biggest attendance yet for what has become a firm fixture in the social calendar of the town.

Playing a key role in the service was Falklands War veteran, Nigel Fielding, who was on board HMS Glamorgan when it was hit by an Exocet missile 33 years ago, killing 14 of his shipmates.

He read a moving poem by a schoolgirl describing her thoughts and feelings at her father leaving for the conflict in the Falklands.

Others gathered to think about their relatives at Christmas time in a building which has been the focus of worship, celebration and remembrance for more than 1,200 years. 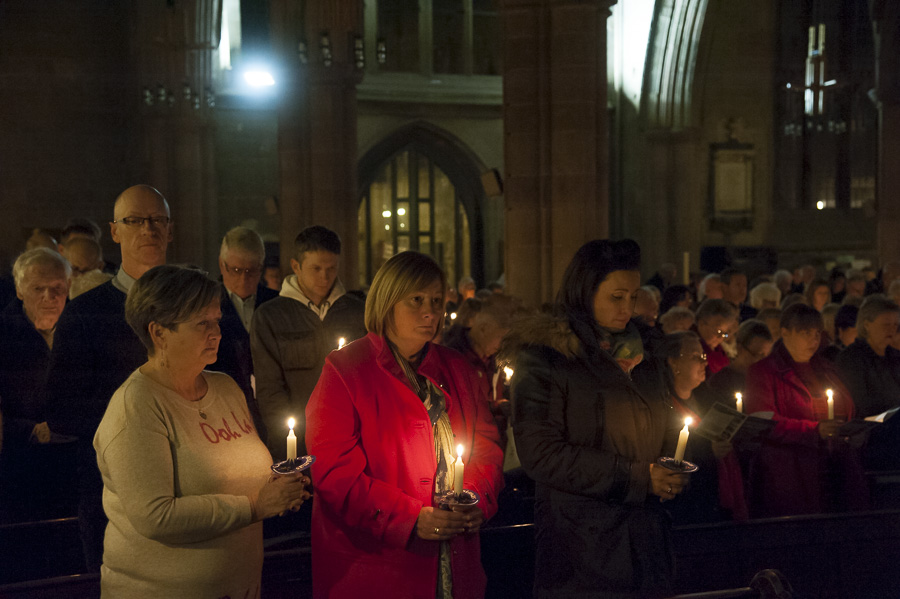 From left to right Sandra Mould, Cherie Nasser and Haidee Riding join the candlelit tribute. Cherie wore a pink coat in memory of her mother Winifred Page who loved the colour and went on her final journey in a pink hearse.

They included Sandra Mould whose husband Dennis died unexpectedly three years ago, the day before her mother’s funeral.

Speaking afterwards, she said: “To me this service is part of Christmas now to come here and remember them.”

Mrs Mould was accompanied by her daughter Haidee Riding and sister Cherie Nasser, wearing a pink coat in memory of her mother Winifred Page, who loved all things pink and was taken on her final journey in a pink hearse.

“We love the candlelit ceremony. We look forward to it. Although it is emotional, we find it uplifting. I was also remembering my brother Richard. We’re very thankful to the Tamworth Co-op. They do such an amazing job,” added Mrs Mould. 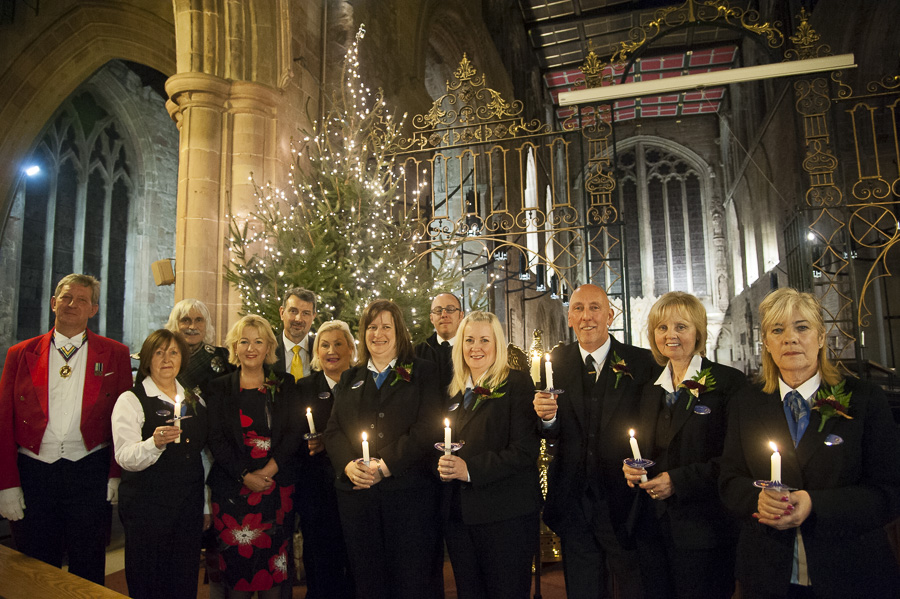 Members of Tamworth Royal Naval Association, bearing their standards, were piped into the church by Andy King.

Julian Coles, chief executive of Tamworth Co-operative Society, addressing the packed gathering, said: “I have the honour of being the 8th chief executive, an office I am extremely proud to hold, never more so than when we have events such as this evening. It really gets stronger and stronger every year.

“I felt tremendously moved by you remembering your loved ones by candlelight.” 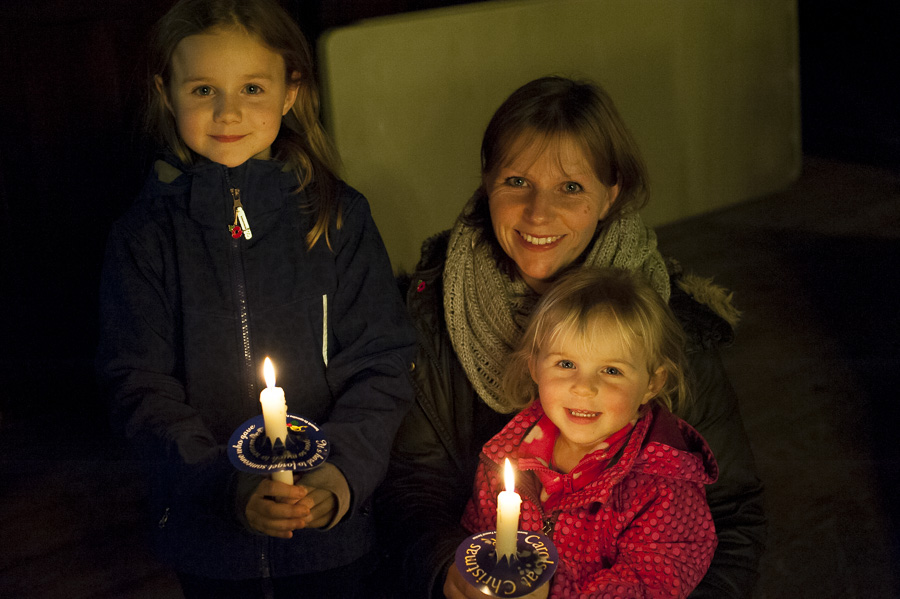 Imogen (7) and Hattie (2) Slesser-Hutchings lit candles for their grandmother and great grandmother, with their mother Joanne.

He paid a special tribute to the funeral team who “work in one of the most challenging environments imaginable and are always so professional and caring. Their work is appreciated by so many families, including my own. Amanda Woodward and her team have put a tremendous amount of work into organising this event which now is a major highlight in the Christmas calendar.”

A collection was held with the proceeds to be shared between the Step by Step bereavement group, which supports parents who have lost a child or a young person, and St Editha’s Church.

Amanda Woodward, general manager of Tamworth Co-op’s funeral division, invited the congregation to enjoy mulled wine and mince pies, as well as fill in memorial tags for the Co-op Christmas trees in the Bereavement Advice Centre and funeral home in Upper Gungate.

“The service is also about the festive spirit and so many people have commented on the wonderfully warm atmosphere,” she said.