The Tamworth Co-operative Society’s Community Dividend Fund enabled Hurley Primary School to restock its library last year – this time around it has turned its attention to numeracy, meeting the cost of a valuable new teaching aid in maths. 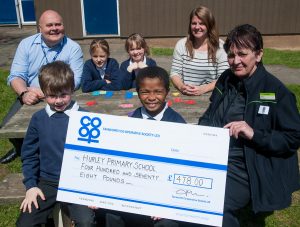 Sheila Villers, manager of the Tamworth Co-op Wood End store, presents the cheque for £478 to Hurley Primary School after being shown the new Numicon maths aid. Head teacher Glyn Morgans is pictured on the back row.

Numicon is an award-winning programme for pupils of various ages and consists of physical shapes representing different numbers. It’s a multi-sensory approach to teaching the subject.

One number that was much appreciated in the school recently was 478 – the amount written on the cheque from the Tamworth Co-op.

Shoppers at the nearby Wood End convenience store helped raise the money by donating their dividends to the school.

“This is the result of an excellent community scheme, and I’d like to thank the Co-op and the shoppers, many of whom I’m sure are parents of pupils at the school.”

It was the second major boost Mr Morgans has had recently as he is a keen Leicester City supporter and is still celebrating his team winning the Premiership.

“I played ‘We are the Champions’ at assembly. I used it to illustrate the David and Goliath story, but I’m not sure it went down too well as some of our pupils are Aston Villa fans!” he said.

She said: “It’s been great that we’ve been able to help the school with such an important subject as maths. From what I can see, Numicon brings a bit of fun to the learning experience too.”