More than 60 Stretton pupils who walk to school and back every day are to party in style, thanks to a £734 windfall from the Tamworth Co-operative Society. The pupils, aged between 5 and 11, are all involved in the William Shrewsbury Primary School’s ‘walking bus’ scheme. 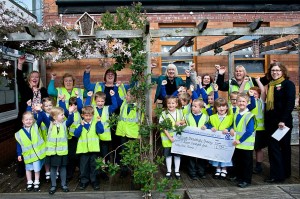 Nikki Axon, is the school’s walking bus co-ordinator and says the party will celebrate the numerous benefits of the initiative. The pupils will enjoy a disco, food and a special magic show.

She says the children’s efforts help to keep at least 40 cars off the roads every day, in addition to providing them with plenty of exercise and fresh air.

“The walking bus scheme started in Staffordshire and is good for both the environment and the children,” she said.

“It helps them to socialise with pupils of different age groups and it fosters great spirit too. We even have a programme of events for the pupils who take part. We enjoy sing-alongs, especially at Christmas. We walk to school together come rain, shine or snow.”

“Another advantage of the walking bus scheme is that pupils arrive at school in a very relaxed frame of mind and are more ready to learn,” she said.

“In addition to easing traffic congestion outside schools, it’s a very healthy way of getting to school safely and on time.”

Acting head teacher Elaine Curtis said the school is very grateful for the money that was raised by shoppers donating their dividends at the Stretton Co-op convenience store.

“We are a co-operative school and fully committed to co-operative values and the notion of working together. We’d like to say a huge thank you to the Tamworth Co-op and the people who donated their dividends at the Stretton store.”

The cheque was presented to the school by Marina Hutton, manager of the Tamworth Co-op convenience store in Stretton, who is a former pupil of the school.

“It’s brilliant that we are able to support the walking bus scheme because it encourages children to talk to each other, enjoy the environment and learn about road safety at the same time,” she said.