Jack might have been the butt of the odd dead parrot joke, but there was a serious point to his appearance at a Tamworth event aimed at encouraging people to talk openly about death.

The 15-year-old rescue parrot turned up with his keeper, funeral director Glen Speak, at a pop-up shop to promote one aspect of the subject – the importance of making plans for pets when their owners die. 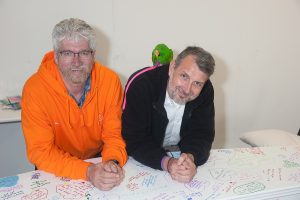 The three-day event at the former Co-op Bank premises in Colehill was organised by Tamworth Co-op’s funeral service with St Giles Hospice as part of national Dying Matters Awareness Week 2018 (May 14-20).

Mr Speak, deputy manager of the service, who keeps rescue parrots, said there are so many issues about dying that people need to consider – even what should happen to their pets when they are no longer around to care for them.

“Some parrots can live for 50 to 60 years and may well outlive their owners. Many animals can have long lives, so it’s crucial people make provision for their pets,” he said.

“The main point of the week is to make people aware there are numerous things to consider before you die, not just making a will, but thinking about what kind of funeral you want.

“It makes everything so much easier for the ones left behind. We know from experience it can remove a lot of distress and potential arguments. Even basic points such as whether they would want to be cremated or buried can be really helpful.”

There was a steady stream of visitors to the shop on Tuesday, Thursday and Friday. They included a man in his fifties with an inoperable brain tumour who resolved to make plans for his funeral after speaking to Mr Speak. 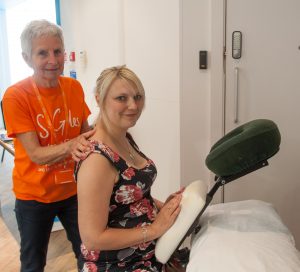 Others like Marie Miles called in for a free massage being offered by a St Giles Hospice complementary therapist. The 37-year-old mother-of-four, from Belgrave, said she had a particular fear of death, but had felt reassured by coming in and discussing the topic.

“I’ve talked to my partner about dying, and told him I want James Blunt’s Carry You Home played at my funeral. I know he wants to be buried.”

Retired catering assistant Margaret Baker, 73, from Bolehall, also popped in for a massage with her husband Graham, 70. She said: “I find it hard to talk about death because it is upsetting, but I do think an event like this is important.” Retired miner Mr Baker said as a result of their visit they would have a chat about what they wanted at their funerals.

Tamworth Co-op staff handed out Funeral Wishes forms, as well as complementary coffee and cakes. People wrote messages to loved ones on a coffin and songs they would like played at their funeral on a blackboard. There was also information available on a range of subjects from bereavement support to the work of St Giles Hospice. 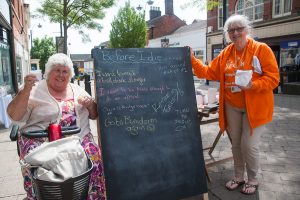 Ian Leech, St Giles Hospice community engagement manager, said: “It’s one of those conversations that scares people. If they just spend 10 to 15 minutes doing that and recording their wishes, they wouldn’t need to have the discussion again. This is the second year we have linked up with Tamworth Co-op to stage this important community event.”