The generosity of shoppers at a Tamworth Co-op store is helping fund international trips for local Guides, including a journey to an orphanage in Mongolia in their centenary year.

Customers at the Kingsbury convenience store rang up more than £600 worth of dividends which they kindly donated to the village Girlguiding group.

The money was handed over as part of the Tamworth Co-op’s Community Dividend Fund which sees thousands of pounds handed out each year to good causes.

Some of the cash raised from the scheme will also go in the kitty to pay for summer camps for the Ist Kingsbury Guides.

Sallyann Blackett, the group’s leader, said she was absolutely delighted after being presented with a cheque for £663 from the Tamworth Co-op. 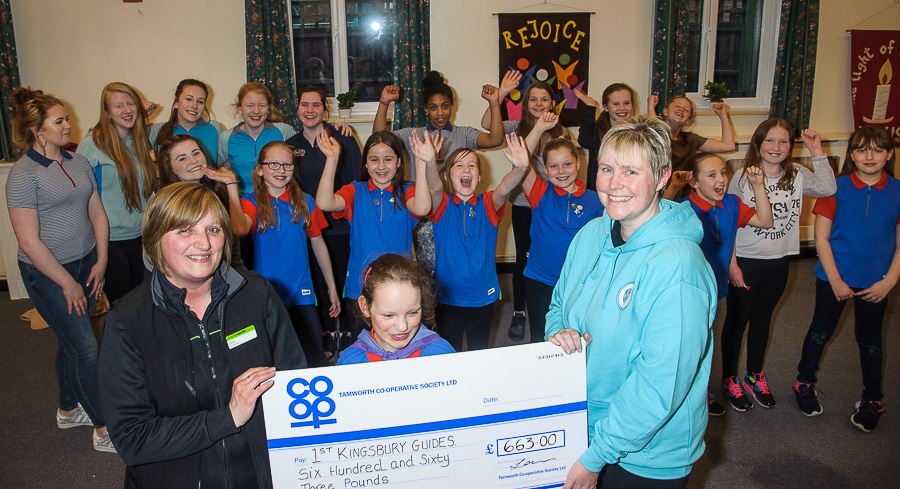 Members of the 1st Kingsbury Guides cheer as their leader, Sallyann Blackett (right), receives a cheque for £663 from Emma Horsham, manager of the Kingsbury convenience store.

“It’s phenomenally hard to raise funds, so this really is appreciated and we owe a big thankyou to the Tamworth Co-op. The Community Dividend Fund is such a brilliant idea because the money raised has come from people in the community and is going back to girls also in the community. It’s good to see it being spent locally.”

Two members of the group’s Senior Section will be travelling to Canada to help out at a scout camp, while a third will head for Mongolia to teach English and work with children with cerebral palsy. The girls have had to do their own fundraising to afford the trips, each lasting three weeks.

The UK Senior Section, which caters for girls and young women, aged 14 to 26, is celebrating its 100th birthday this year, and some of the dividend money will also pay for a centenary camp in August.

Emma Horsham, manager of the Kingsbury shop in Tamworth Road, said: “It’s so nice to be able to do something like this that benefits people on our doorstep. There was a big thumbs up from our shoppers for the village Guides when we asked them to vote for who they would like to see benefit from the dividend scheme, and we wish the girls a safe journey. It will be a fantastic experience for them.”

The cheque presentation at the Methodist Church in Kingsbury was the first of more than a dozen taking place over the coming weeks in the Tamworth Co-op’s trading area.