A village primary school is celebrating some good news after receiving a windfall from Tamworth Co-op’s Community Dividend Fund.

Customers at the co-operative society’s Kingsbury branch raised £500 by donating their ‘divis’ to Kingsbury Primary School for an improvement that would benefit pupils.

Head Karen Hanson said the award came as a ‘complete surprise’ as she had no idea the school had been chosen for funding from the scheme.

“It was such a lovely call to receive and very exciting. We’re really grateful to the shoppers and the Tamworth Co-op for their generosity. Our playground needs upgrading, so we may spend the money on doing that and also buying some more outdoor equipment.

“The PTA has been raising money to provide markings for games such as hopscotch which have worn away. It’s very expensive to do because they have to be melted on using a thermoplastic material to make them last for a long time. Having this cash now will make a real difference to those fundraising efforts. We’ve got a blank canvas to lay out all types of different games and activities which all the pupils can benefit from. It would also be nice to have some bright markings for the four to seven-year-olds in their play area.” 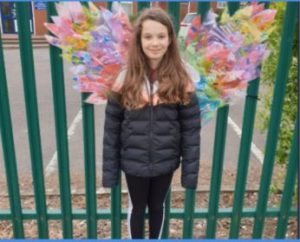 Alex, one of two pupils working from home, who popped by the school gate for a photograph next to wings made by children of key workers as part of a topic on birds.

The school, which has 260 pupils aged four to 11, is currently preparing to welcome all of its pupils back in September following the easing of the lockdown restrictions. About 50 pupils in reception and Years 1 and 6 have already returned, including the children of key workers.

Emma Horsham, manager of the convenience store in Tamworth Road said she was delighted with the response from customers to its annual fundraising appeal.

“The cause has to be on their doorstep. It means the money they spend is effectively kept within the community for the benefit of residents, young and old. In past years, we’ve donated money to a variety of worthy organisations, including clubs, charities and schools.”

Each of Tamworth Co-op’s eleven convenience stores, plus its supermarket and fashion outlet in the centre of Tamworth adopts a cause to support. Now in its eleventh year, the Community Dividend Fund hands out around £10,000 annually to local groups in its trading area which covers Staffordshire, North Warwickshire and South Derbyshire.