It was one of the strangest sights Tamworth Co-op funeral staff had ever seen when their manager swooped unexpectedly on them in a motorcycle sidecar. 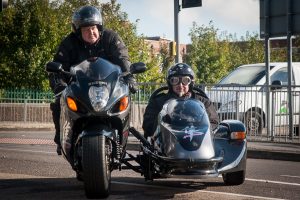 Paul and Glen on the chocolate run.

Sporting goggles and a helmet, one funeral director said he looked ‘disturbingly like Olive from the seventies sitcom On the Buses.’

The surprise visit to the branches was the result of a promise made to Glen by Paul Sinclair, owner of Motorcycle Funerals, Britain’s first motorcycle hearse business.

In a casual conversation, Glen told Paul the Tamworth Co-op had been shortlisted for a national Good Funeral Award. Paul responded by saying that if the firm won, he would take Glen around all the branches in his motorcycle to deliver chocolates to the staff.

A few days later TV celebrity Penny Smith presented the Society’s funeral division with the top honour for ‘The Most Significant Contribution to the Understanding of Death’ at the Good Funeral Awards held in London. 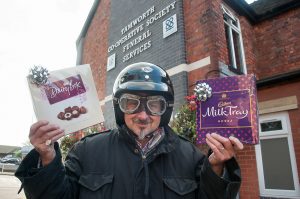 Glen ready to hand out gifts to the funeral staff.

Glen, who is deputy manager of the Tamworth Co-op funeral division, wasted little time in reminding Paul about his pledge.

Paul, a previous winner himself in the ‘Best alternative to a hearse’ category, said: “It was a classic case of opening my mouth before my brain was in gear. I promised Glen that if they won, I would drive him round to every branch in the division in my sidecar like a chocolate Santa handing out treats to all the staff.”

“It was obviously a light-hearted day, but it does have a serious side. By the very nature of the work our staff need to be genuinely caring and dedicated people. They do such a lot to support bereaved families in the community. The support and attention they offer to people before, during and long after a funeral has taken place played a big part in us winning this award. 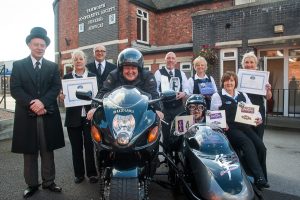 Glen and Paul with some of the funeral staff they surprised in Tamworth.

“We wanted to acknowledge the part they have played and the incredible job they do for people experiencing a most distressing time in their lives.”

Paul, whose motorcycle hearses have been featured in the national press and on TV programmes such as Emmerdale, added: “I’ve seen enough chocolate to last a lifetime, but I’ve met a lot of the staff on various funerals. They truly deserved this surprise.”