A Tamworth vicar spoke about the death of his son, two weeks before his 10th birthday, as more than 500 people came together to remember lost loved ones at St Editha’s Church.

Reverend Vic Van Den Bergh implored the congregation never to forget the departed in a powerful, heart-felt sermon in which he also talked about burying his wife and parents. 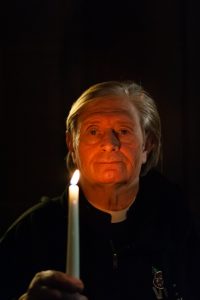 Reverend Vic Van Den Bergh, resident minister at St Francis’ in Leyfields, holds a lit candle in memory of his son Timothy who had cerebral palsy and died in 1992.

In a message of hope, the resident minister at St Francis,’ Leyfields, told the gathering at the annual Tamworth Co-operative Society Christmas Memorial Service:

“I have been up personal with grief more times than I can count and held more hands than is fair or reasonable. I have comforted many of you and every time it is privilege.

“My son Timothy’s picture was shown on Songs of Praise and when I saw it my bottom lip wobbled, but I took away a special gift. It was not RIP. It was a bon voyage, see-you-soon moment.

“This Christmas don’t let a loved one go. Don’t ever let their memories go. Don’t let anyone tell you you are being morbid. I want you to come to a place like this every year. You are not alone. Never lose hope. You are a prayer away from talking to the boss.”

The vicar, who is also honorary chaplain at the National Memorial Arboretum, commended the professionalism of Tamworth Co-op staff and said a prayer for the dead. He stood in for Reverend Alan Gordon, vicar of Tamworth, after he was called away by an emergency.

This year (2019) was the 10th anniversary of the service which has become one of the biggest events in Tamworth’s festive calendar. 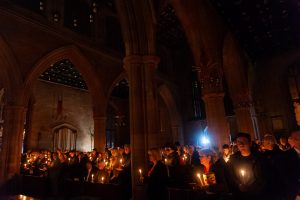 Hundreds of people packed into St Editha’s Church to light candles in memory of lost loved ones and join in celebrating Christmas with carol singing.

Beneath the vast roof of St Editha’s – once at the heart of the ancient kingdom of Mercia – the huge congregation lit candles during the focal point of the emotionally charged service on the night of December 6. Then they poignantly held them aloft as the lights were dimmed and the church choir sang Silent Night. Scottish bagpiper, Jonathan Prior, emerged slowly from the back of the church, playing unaccompanied as he walked down the aisle, still in darkness.

Young and old joined in the tribute, singing carols to celebrate the season of goodwill. 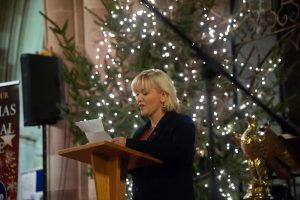 In her welcome address, Amanda Woodward, general manager of Tamworth Co-op’s funeral division, greeted the churchgoers, including Mayor of Tamworth Richard Kingstone. She expressed her hope that they would find ‘great comfort in being able to pay a personal tribute to individual loved ones, while standing shoulder to shoulder with families all going through the same experience.’

She also spoke of the bravery of Amelia Eldred, from Kingsbury, who was just eight when she had to have her left leg amputated last year. She underwent a rare procedure to reattach the lower part of her leg backwards so that she could have an artificial limb fitted.

Proceeds from a collection at the service will be split between a trust set up by her family to help other children in similar circumstances and St Editha’s for the upkeep of the church. 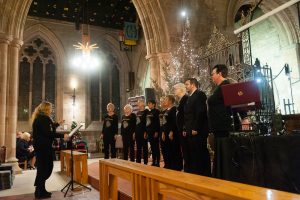 Sing4Pleasure performed Leonard Cohen’s Hallelujah and The Rhythm of Life.

The Sing4Pleasure choir opened the proceedings with a brilliant rendition of Leonard Cohen’s haunting anthem, Hallelujah. There were fine solo performances by Tom Clamp and Claire Harvey-East who came together for a duet, Time To Say Goodbye, as sung in Italian by Sarah Brightman and Andrea Bocelli. Staff from the funeral service read poems based on the theme of Yuletide.

Among those who came to remember relatives were Kathleen Cowell, from Kettlebrook, who was paying tribute to her late husband George. She said: “My husband passed away from cancer 10 years ago when he was 62 and since then I’ve come to every service. I find it so comforting.” 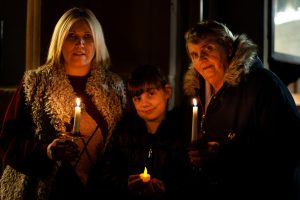 Holding lit candles during the service are (left) Jenny Williams, 46, from Fazeley, with daughter Katelin Cormill, 7, and mother Kathleen Cowell, 70, from Kettlebrook.

She was accompanied by her seven-year-old granddaughter Katelin Cormill and daughter Jenny Williams, from Fazeley, who agreed  that the service helps people to deal with loss: “Everyone is in the same situation. The vicar’s speech was amazing.”

In his closing speech, Tamworth Co-op chief executive Julian Coles, described Reverend Van Den Bergh’s message as ‘the most moving and compassionate thing I have heard in my life,’ adding:

“Over the last year my own family has attended a number of funerals. The most poignant and saddest was just over three months ago with the passing of my youngest son’s best friend Tom whose 30th birthday would have been later this month. 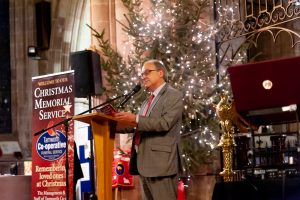 “We have these individual memories and reflections. For so many of us to be able to come together holding our candles, with the lights dimmed, in this wonderful setting makes it so very memorable and I think helpful.”