A Woodville funeral home threw open its doors to residents who tucked into an array of delicious cakes over a cuppa to raise money for people with cancer.

The treats were served up by staff at Co-operative funeralcare  in Granville Street who brought out their best china for the World’s Biggest Coffee Morning in aid of the Macmillan charity. 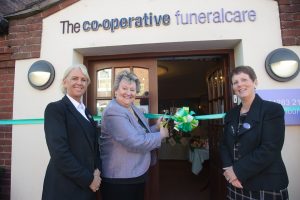 South Derbyshire MP Heather Wheeler took time off from her busy schedule to open the event by cutting a ribbon and chatted with visitors, while local traders also rallied to the cause.

The Buckley Bakehouse in Swadlincote provided their best bakes and traditional breads for people to sample, and many other businesses in the town contributed raffle prizes.

Donations included a sweet hamper from Churchills Traditional Sweet Shop, earrings from Baumgartner jewellers, perfumes from Boots and Dean & Smedley, a spiral hose set from Masseys and a cash voucher from K C Fish Bar, along with wine from Granville Stores and a 30-minute facial from Sublime Beauty Salons, both in Woodville. There was also the chance to win a £100 hamper from the Tamworth Co-op and a competition to guess how many spots there were on a sponge cake. 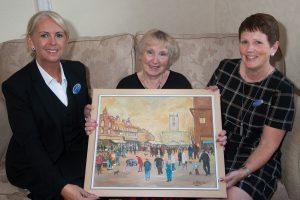 Pat Richards (centre) displays the painting of Burton Market by her late husband Stan, which was auctioned to help raise funds for the Macmillan cancer charity. Pictured with her are funeral director Lorraine Walker (left) and bereavement and community co-ordinator Angela Bowyer.

A highlight of the coffee morning was a ‘Silent Auction’ for a painting by well-known Burton artist and barber Stan Richards who died recently after having suffered from cancer. Those attending were invited to put their bids in an envelope. The picture of Burton Market was donated by his widow Pat who said it was inspired by the work of Lowry, an artist her late husband admired.

Bereavement and community co-ordinator Angela Bowyer said: “We raised £260 which was a fantastic effort and we’d like to thank everyone who supported us on the day. It was hard work but it was well worth it.”

Mrs Wheeler said: “The Macmillan coffee morning has turned into an absolutely must attend annual event for me since I became an MP in 2010. I have been to so many wonderfully community minded firms over the years. So this year it was a pleasure to come to the Co-operative funeral parlour. I was particularly impressed by the warm and caring welcome all the staff gave me.”

Thousands of groups up and down the country took part in the Macmillan fundraiser which last year raised £25 million. The money is used to provide medical, emotional, practical and financial support to 2.5 million people in the UK who have cancer, along with their families and friends. 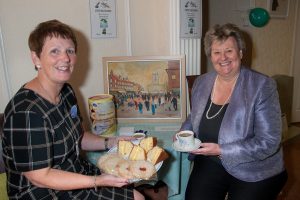 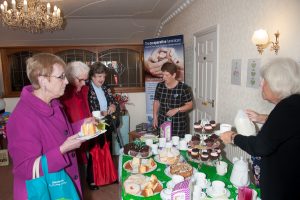 Coffee is served….residents enjoying the refreshments at the Macmillan fundraiser.