An association with a twenty-year waiting list has gained five new members.

The Tamworth Co-op Employees’ Long Service Association was formed in 1973 to reward people who have worked for the Society for more than 20 years.

Former Chief Executive Alan Glover helped to set up the association and was guest of honour at its 40th anniversary dinner dance held at Drayton Manor’s Hamilton suite.

During the evening four new members were presented with gift vouchers by the Society’s chairman Audrey Higginson and chief executive Julian Coles. Before handing out the long service awards, Mr Coles jokingly described himself as a relative ‘new boy’, having been with the Society for a mere 16 and a half years.

“It’s nice to be able to give something back to the people who have served us so well over the years,” he added.

“As a society we are proud that so many people choose to stay with us for most, if not all of their working lives.” 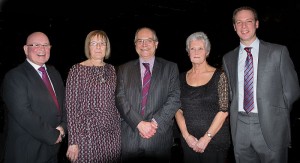 Tamworth Co-op chief executive Julian Coles (centre) is pictured with the four employees who were presented with long service awards at the dinner dance. They are (from left to right) Bill Galvin, Judith Lees, Sue Williams and Dan Welsh.

Several Tamworth Co-op senior executives were among the 80-plus guests at the dinner dance. Mr Glover, who was invited to cut the association’s special 40th anniversary cake, described long serving members as the ‘backbone of the society.’

His own remarkable career in the Co-operative movement began in 1942 when he took up the post of office lad in Burton. He joined the Tamworth Co-op in 1958, rising to chief executive before retiring in 1992. 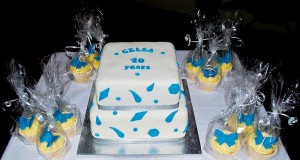 In true Co-operative spirit, a fundraising activity was organised during the dinner dance which raised £170 for the Sharon Fox Cancer Centre.

The long service association has 154 members and also provides a social link between current workers and retired colleagues.