A new bereavement support group is being launched by the Tamworth Co-operative Society’s funeral branch in Woodville, offering free expert help to people struggling with the death of a loved one. 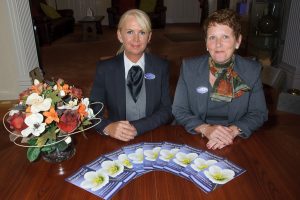 Angela Bowyer (right) and Lorraine Walker are ready to help bereaved people with the launch of the Forget-me-not Support Group.

Based at the Woodville Co-op funeral home in Granville Street, the Forget-me-not Support Group will be managed by its newly appointed bereavement and community co-ordinator Angela Bowyer.

The inaugural meeting will be held at the funeral home on Wednesday September 14. Thereafter sessions will be held on alternate Wednesdays.

To ensure that everyone can be supported, two sessions have been organised. The daytime group will meet from 10.30am to 12.30pm, with the evening session taking place between 6.30pm and 8.30pm.

“I would like to stress that this is not exclusive to families of people we have conducted funerals for,” said Angela.

“Those families have, of course, been contacted, but this is a new form of aftercare in the community. It goes well beyond what a funeral director’s normal duties would be. Anybody who needs help will be made welcome.”

She added: “We know there are many people who are struggling because of grief. We want to reach out to people, not just in Woodville, but to anybody living in South Derbyshire and beyond who feels in need of support.

“This is a personal and informal service where we can help people, and members of the group can help each other. It will be relaxed and informal.

“Losing a loved one can leave you lonely and isolated, needing to talk to others who care and understand your grief and we want to support people through those times.”

Angela is a greatly experienced funeral director with qualifications in counselling. Although she will still be arranging and conducting funerals, her key role will be to support the bereaved.

She says her work comes ‘straight from the heart’ as the pain she suffered when losing her baby daughter was the reason she entered the funeral profession nearly 20 years ago.

She also played a key role in setting up Burton SANDS, a self-help group for people who have lost babies or very young children.

“SANDS made me realise just how important it is to be in an environment where you can feel safe and are able to be yourself without fear of being judged.

“I understand only too well how grief feels. Losing my daughter when she was just 28 hours old had a devastating effect on all of my family. Even daily tasks were difficult to carry out.”

Angela plans to establish close links with other support and bereavement groups operated in the area by St Giles Hospice.

“The idea is to see how we can complement each other so we can offer the best support possible.”

Angela will be helped by Lorraine Walker who joined the branch at the same time. Although new faces at the Woodville Co-op, both are already well known in the Woodville, Ashby, Swadlincote and Burton communities. They both have long and impressive careers in the funeral business and worked together at Central England Co-op. They have lived – as well as worked – in the area for many years.

Anyone interested in attending or who requires further information is asked to call Angela or Lorraine on 01283 217237 for an informal chat.